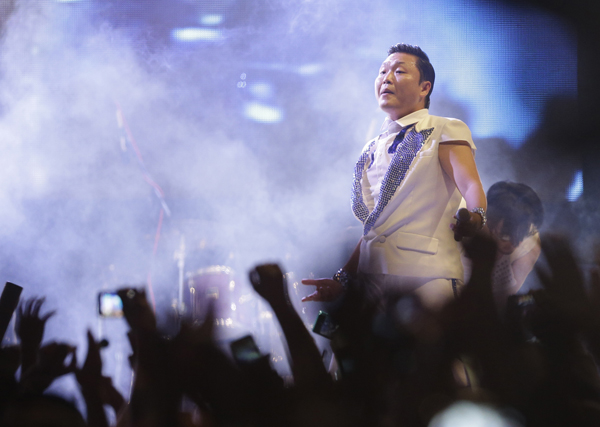 Rapper Psy is galloping to the summit of the Billboard Hot 100 chart, the first Korean musical act to do so.

Yesterday, his “Gangnam Style” reached No. 2 on the industry’s most important chart, which tracks the popularity of single songs in the U.S. in terms of both air and Internet play and sales.

If Psy, 34, can beat “One More Night” by Maroon 5, which has been No. 1 on the chart since Sept. 19, he may be forced to keep a promise he gave at a press conference Tuesday after he returned to Korea following three weeks of triumphant touring of the U.S.

At the press conference, Psy said that if “Gangnam Style” hit No. 1, “I’ll dance the horse-galloping dance in front of City Hall topless.”

Psy’s giddyap dance is a major part of the success of his “Macarena”-like hit.

Last week, “Gangnam Style” was No. 11 on the chart. The next Billboard Hot 100 will be released next Thursday in the U.S., although Billboard will probably report on it the day before.

According to Billboard, “Gangnam Style” was “surging in all fields that contribute to the Hot 100’s data pool” as it climbed to the top from fourth on digital songs, to ninth from 43rd on on-demand songs, as well as to 34th from 68th on radio songs. 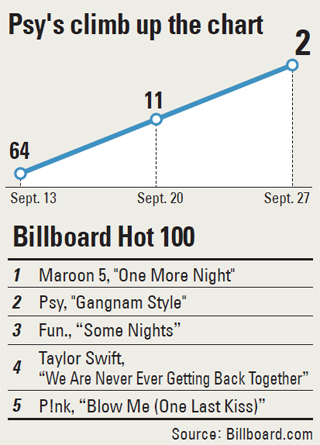 Overall, Psy’s score climbed by 67 percent within a week, which threatens Maroon 5’s “One More Night,” which only saw a 12 percent increase in the same week.

“With ‘Gangnam Style’ up by 67 percent in overall Hot 100 points and ‘One More Night’ gaining by 12 percent, and the points gap between the two songs tightening this week, the stage could be set for Psy to trot into the chart’s winner’s circle as soon as next week,” according to Billboard’s report.

Just two weeks earlier, Psy entered the chart at No. 64 and shot up to No. 11 the following week.

Both of those rankings were records for a Korean act.

The best performance of a Korean act on the Billboard Hot 100 chart was the Wonder Girls, who climbed to No. 76 with “Nobody” in 2009.

Pop columnist Kim Gwang-hwan said in a radio interview with CBS yesterday morning that Psy hitting No. 2 on the Billboard Hot 100 is “equivalent to an athlete bringing to Korea 20 gold medals from the Olympic Games as more than 200 million people viewed Psy’s music video.”

According to an excited Kim, “Korea should give Psy at least 2 billion won [$1.8 million] as a reward” for enhancing national prestige.

“I’m sorry to say this, but he is performing the duty that hundreds of diplomats overseas should be doing.” The record for an overseas artist on the U.S. Billboard Hot 100 is held by the Spanish dance song “Macarena” by Los del Rio, which stayed at No. 1 for 14 weeks in 1996. The record for Asian artists goes back to 1963 and “Sukiyaki” by Kyu Sakamoto, which maintained the top position for three weeks.

Psy is short for Psycho. The rapper’s real name is Park Jae-sang.

Meanwhile, Psy met with Google Executive Chairman Eric Schmidt, who was on a visit to Korea, yesterday at Google Korea headquarters in southern Seoul and personally taught him how to do the horse-galloping dance.

As Google’s YouTube is considered a main contributor to Psy’s soaring popularity worldwide, yesterday’s meeting was seen as a thank you from Psy, although Schmidt now has some new moves for the company Christmas party.