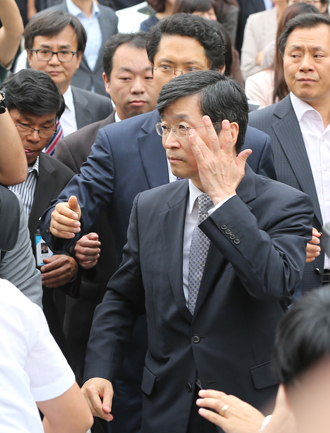 Kwak No-hyun, superintendent of the Seoul Metropolitan Office of Education, walks out of the education office yesterday after bidding farewell to staff when the Supreme Court upheld a conviction against him for bribing a former election rival. [YONHAP]

Kwak will forfeit his job, serve the prison sentence handed down after his first appeal and return about 3.5 billion won ($3.1 million) of campaign expenses reimbursed by the state-run National Election Commission. Kwak will hold a press meeting today and then immediately go to prison.

The 58-year-old superintendent was convicted of giving 200 million won to Park Myong-gee, a professor at Seoul National University of Education and a liberal candidate in the election for superintendent of the Seoul Metropolitan Office of Education, in June 2010.

Park abandoned his candidacy, and Kwak won. Prosecutors said it was a simple bribe, while Kwak said he gave Park the money as a “goodwill gesture” after he heard Park was having money problems. 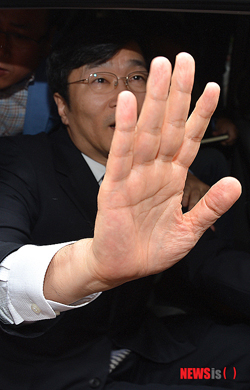 The Supreme Court yesterday said it “admitted the fact that Kwak gave the 200 million won in exchange for Park abandoning his candidacy in the Seoul superintendent election, which violates the regulation.”

At the first trial in January, the court convicted Kwak of bribery and violation of the Local Education Autonomy Act and the Public Official Election Act, fined him 30 million won, and released him from 132-day-long custody.

He immediately filed an appeal, but the appellate court in April gave him a heavier ruling, a one-year jail sentence, saying the previous one was too light. But the court delayed his prison time until the Supreme Court made its ruling.

However, the Supreme Court overturned the ruling against Kang Kyung-seon, Kwak’s best friend and the go-between who delivered the money to Park, and sent the case back to the Seoul High Court. Kang was fined 20 million won at his first and second trials.

Under election law, if the Supreme Court upholds a ruling that fines an elected government official more than 1 million won, the election becomes invalid and the official loses his or her job. Kwak also has to return campaign expenses reimbursed by the National Election Commission. A by-election to fill his post will take place on the day of the presidential election, Dec.19.

Kwak spent 132 days in jail prior to his first trial, so he will have to serve the remaining part of the sentence, about eight months.

Kwak didn’t attend the court hearing yesterday, and he was informed of the verdict at his office. After that, he started a resignation ceremony and apologized for not completing his term.

However, he continued to say he was innocent. He said it was ridiculous to say the money given to Park was related to the election because he gave it nine months after his victory.

“I have been convicted ridiculously, but I believe this case will be a source of hope in the future,” Kwak said.

The former law professor at Korea National Open University served as secretary general of the state-run National Human Rights Commission between 2005 and 2007.

When he declared his candidacy in local elections in June 2010, he was not known as an educator, but he described himself as a liberal who would use innovation to solve the problems of the Korean education system.

Park was a strong rival, and he gave up his candidacy two weeks before the election. Kwak beat a conservative ruling party candidate by a narrow margin of about 1.1 percentage points.

During his 27 months in the job, Kwak pushed a string of controversial education polices such as abolishing corporal punishment at all schools, free lunches for all students and founding so-called “innovative schools,” a new kind of public school that focuses on debate-centered classes and extracurricular activities.

He clashed with conservatives in the Ministry of Education, Science and Technology and former Seoul Mayor Oh Se-hoon, who especially condemned Kwak’s free school lunch scheme.

Conservative teachers and educators were delighted by yesterday’s ruling. Some even convened a press conference in front of the Supreme Court and said they welcomed the ruling and demanded that the Seoul education office “stop or abolish all of Kwak’s pledges immediately.”

The ruling Saenuri Party’s spokesman Shin Ui-jin said in a statement that the ruling was no surprise and that Kwak has destroyed Seoul’s education policies.

Kim Chil-jun, an attorney for Kwak, said he feels sorry about the ruling.