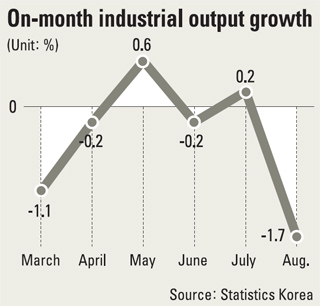 Output fell 0.7 percent last month from July when it dropped a revised 1.9 percent, Statistics Korea said yesterday. The median estimate of 13 economists in a Bloomberg News survey was for a 0.4 percent decline. Production rose 0.3 percent from a year earlier.

The outlook for Asia’s fourth-largest economy has dimmed as exports, which make up half of gross domestic product, decline and manufacturers’ confidence dips to a near three-year low.

The Bank of Korea will add to an interest rate cut in July with a reduction in October and then again early next year to help rekindle growth, predicted Lee Geun-tae, an economist at LG Economic Research Institute in Seoul. 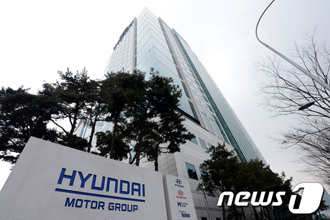 “More signs of the economy sliding into a recession give more justification for the Bank of Korea to reduce rates,” Lee said. “The central bank has very little reason not to cut in an environment of easing inflation and limited fiscal support from the government.”

Separately, the current account surplus narrowed to $2.36 billion in August due to a decline in exports, compared with a revised record surplus of $6.14 billion in July, the Bank of Korea said in a statement yesterday. The current account is the broadest measure of trade, tracking goods, services and investment income.

A strike at Hyundai Motor, Korea’s largest carmaker, also dented output in August, said Lee Sang-jae, a senior economist with Hyundai Securities. The labor stoppage was the costliest in the company’s history, amounting to 1.7 trillion won ($1.5 billion) in lost production.

Korea’s gross domestic product rose 2.3 percent in the second quarter from a year earlier, the slowest pace in almost three years. Exports probably fell for a third month in September, according to a survey by Bloomberg News before the data was to be released on Oct. 1.

“The economy is losing pace quite fast and the external outlook is still dim,” Hyundai Securities’ Lee said. “The Bank of Korea will cut interest rates in October to boost domestic demand.”

The Ministry of Strategy and Finance announced 5.9 trillion won of spending and tax relief this month to offset the impact of Europe’s protracted debt crisis, adding to 8.5 trillion won of support measures in June. Still, the International Monetary Fund on Sept. 21 reduced its growth forecast for Korea to 3 percent this year from a June estimate of 3.25 percent. Bloomberg