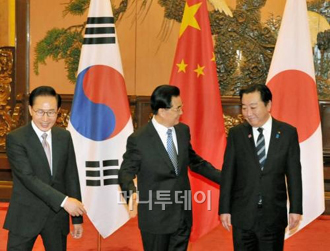 Korea, China and Japan will begin their own domestic procedures next month for the launch of free trade talks among the nations, Seoul’s trade ministry said yesterday.

Wrapping up a two-day working-level meeting in Seoul this week, the three nations agreed to start necessary procedures such as public hearings, the ministry said.

The three major East Asian countries have been working to launch their trilateral free trade talks in November, when their leaders are scheduled to meet in Cambodia for a regional conference. Korea and China are currently in talks over their bilateral free trade agreement. Free trade talks between Seoul and Tokyo have been stalled since late 2004, mainly because of Japan’s reluctance to lower tariffs on agricultural goods.

But there are growing concerns that ongoing territorial disputes among the three East Asian countries may delay the launch of free trade negotiations among them as was scheduled.

The latest outbreak of anti-Japan sentiment flared over Japan’s recent decision to buy some disputed islands in the East China Sea, known as Senkaku by Japan and Diaoyu by China, from Japanese owners.

Also, diplomatic tension between Seoul and Tokyo remains high following the unprecedented Aug. 10 visit to the rocky outcroppings of Dokdo in the East Sea by President Lee Myung-bak. Yonhap