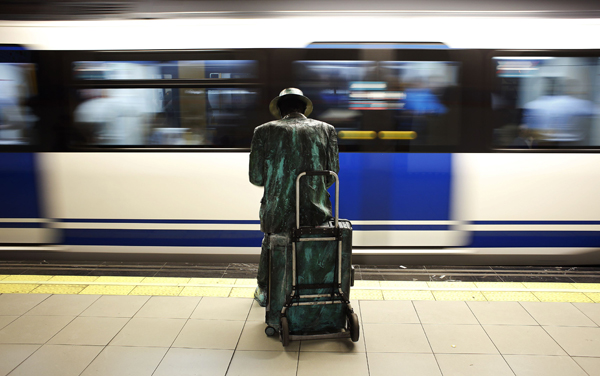 A man dressed as a human statue waits to get on the metro at a subway station in Madrid Thursday. Madrid metro workers will go on strike for the third time this month Friday to protest against salary cuts and price increases. [REUTERS/YONHAP]


Spain and Greece outlined plans Thursday to further reduce government spending and raise taxes to convince international lenders and financial markets they are on the right track to cut their deficits.

The latest round of belt-tightening comes as economies across Europe get weaker and public resentment toward austerity grows stronger.

Spain’s plan to slash its deficit in 2013 is viewed by many analysts as a signal that it’s preparing to request a financial lifeline from other governments and the European Central Bank. To receive this help, countries must first show they are serious about reining in deficits.

“This is a budget in times of crisis but one to help get out of the crisis,’’ Deputy Prime Minister Soraya Saenz de Santamaria said.

For similar reasons, Greece’s coalition government agreed to cut spending over the next two years by 11.5 billion euros ($14.77 billion). Without the cuts, Greece would have been cut off from vital bailout loans that it needs to pay its bills and keep it in the euro zone. The loans come from the International Monetary Fund, European Union and the ECB.

Financial markets cheered the budget-cutting. In Europe, stocks came back from one of their worst days in months in expectation of the Spanish measures. The benchmark stock index finished 0.7 percent higher in France and 0.2 percent higher in Germany and Britain. Borrowing costs for financially troubled Spain and Italy also edged down. The Dow Jones Industrial Average rose 100 points in afternoon trading.

Other news from around Europe showed that the region remains in trouble. Economic confidence in the 17 countries that use the euro fell to its lowest level in over three years, according to a survey by the European Union’s commission. Meanwhile, unemployment figures in Germany continued to drift higher in spite of a small seasonal boost in jobs, underlining concerns that Europe’s biggest economy is slowing down. Across the region, six countries are in recession, and economists predict the entire region could be heading for recession by the end of the year.

Throughout the three-year financial crisis, euro zone governments have had to impose harsh cuts and reforms to get control of their debts and - in the case of Greece, Portugal and Ireland - qualify for vital aid. The austerity measures have hit citizens with wage cuts and fewer services, and left their economies struggling through recessions as reduced government spending has undermined growth.

In some countries, the austerity measures have sparked violent protests, but governments have pressed on with the cuts and reforms to get the euro zone financial crisis under control, and to get help from other countries and organizations.

Recession-hit Spain has come under pressure to take up the ECB on its offer to buy unlimited amounts of government bonds to help lower borrowing costs for countries struggling to manage their debts.

Such large-scale purchases of short-term government bonds would drive up their price and push down their interest rate and take some pressure off financially stressed governments such as Spain.

Spain is at the center of the euro zone crisis. Its 1.4 trillion euro economy is the fourth-largest among the 17 countries that use the euro, and any request for a full bailout would stretch the region’s finances. The country is struggling in a recession to prop up its shaky banking sector and support its heavily indebted regional governments. It has already introduced several packages of tax hikes, civil servant wage cuts and freezes in a bid to get out of the crisis.