Staying in town for Chuseok? No problem

Staying in town for Chuseok? No problem 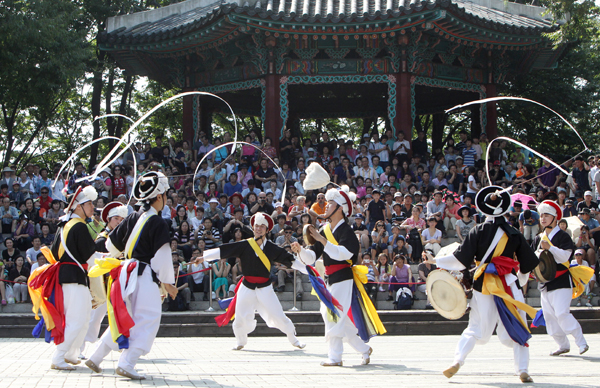 
As the population in Seoul began to thin out ahead of the three-day Chuseok holiday that starts today, those remaining in the uncharacteristically quiet capital might wonder if there will be anything going on this weekend.

Fear not. Several cultural, recreational and municipal organizations in Seoul plan on providing a variety of Chuseok-related events and some are set to continue right through National Foundation Day on Wednesday.

Namsan Park on Mount Namsan will provide a free taekkyeon class each day at 11 a.m. to teach the less-known martial art. The park will also have a program in which participants make Korea’s traditional game gear, such as paengi.

The Dream Forest in Gangbuk District, northern Seoul, will hold a free traditional performance by The Gwangdae at 11 a.m. on Monday.

At Cheongyecheon, central Seoul, a Korean traditional music festival, the 2012 Hangawi Gukak Hanmadang, will be held tomorrow. At the event, sponsored by the city government, people will be able to attend a tteok-pounding ceremony and concerts featuring gukak or other fusion music, as well as taste a variety of sweets. Festivities start at 1 p.m. There will also be demonstrations of tightrope walking by Kim Min-jung and taekwondo.

At city-managed Namsangol Hanok Village in Chungmuro, there will be a holiday folk festival with pansori (narrative singing) and ganggangsuwollae (circle folk dance) performances.

Visitors will have a chance to make yeon (paper kites), and costumed actors portraying Joseon Dynasty merchants will reenact market activities from centuries ago. 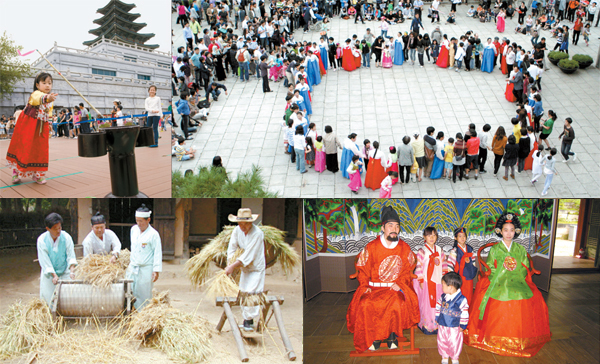 Clockwise from top left : Tuho (arrow tossing) and ganggangsuwollae (circle folk dance) are among the activities to be held at the National Folk Museum of Korea. Taking photos with a Josean-era king and queen is possible at Changgyeong Palace, while those who would like to experience the harvest to the fullest can thresh and polish harvested rice at the Korean Folk Village in Yongin. Provided by organizers


The city also provides a class for charye at Unhyeon Palace in Jongno District, where visitors will learn about the Korean ancestral veneration ritual conducted at major holidays, including Chuseok. The class will be held between 10 a.m. and 3 p.m. each day.

Changgyeong Palace will host a photo event where the visitors can take pictures with staff wearing Joseon Dynasty king and queen costumes.

Entrance to the palaces tomorrow is free for everyone, and free today and Monday for anyone wearing hanbok.

The Korean Folk Village in Yongin, southeast of Seoul, has abbreviated traditional ceremonies throughout the year, but during the Chuseok holidays it focuses on the original full-length versions. Audiences will be able to sample accompanying food after the ceremonies.

As Chuseok is a celebration of the autumn harvest, there will be demonstrations of threshing and polishing using traditional implements. The sessions will be held from 1 p.m. to 5 p.m. daily through Wednesday. Traditional dance, and daechwita (pipes and percussion) and Korean drum performances will be staged tomorrow and Monday.

The National Folk Museum of Korea at Gyeongbuk Palace hosts the 2012 Chuseok Grand Festival with a variety of experiences and learning today through Monday. The program includes making danso (short bamboo flutes) and gift boxes as well as learning folk songs. Traditional folk performances and cultural exhibitions will also be available. Visitors will be provided with tteok on a first-come-first-served basis. Festival hours are 10 a.m. to 5:30 p.m. today and tomorrow, and 10 a.m. to 7:20 p.m. Monday.

The National Museum of Korea will showcase a free traditional music concert at Theater Yong at 3 p.m. tomorrow. The concert will be narrated by Hwang Byung-ki, a well-known gayageum musician. No interpretation will be available.

Those interested in janggu (an hourglass-shaped drum slung across the chest) will be able to learn and perform in a single day through a program offered by the Chongdong Theater. In the concert, set to be held at Ssamji Madang, the theater’s samulnori troupe will give a 30-minute lesson to participants who will join in a concert session to follow. Fifty seats are available for the program at a cost of 5,000 won ($4.49) each. For reservations, call 02-751-1500. 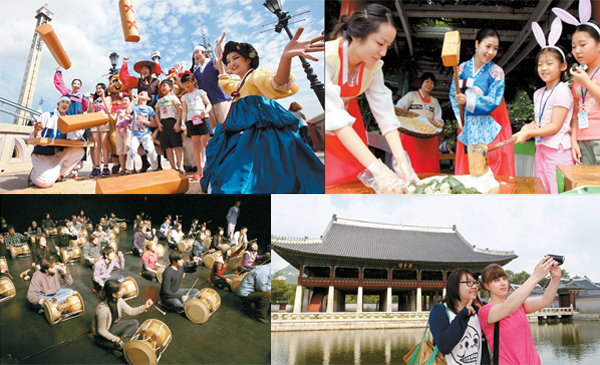 Clockwise from top left : Lotte World in Jamsil offers a special Chuseok show with traditional games, such as yut and teok-pounding is popular at Seoul Land. The four major palaces in Seoul are offering free admission tomorrow, while the Chongdong Theater provides a one-day class today on janggu, the hourglass-shaped traditional drum. Provided by organizers


Amusement parks also stage Chuseok events. At Seoul Land in Gwacheon, south of Seoul, Kim Dae-gyun, who performed the tightrope-walking scenes in place of the main character in the movie “King’s Clown,” will perform at 3 p.m. tomorrow. For visitors brave enough to try tightrope walking, there will be a mini-rope with the staff on standby to help.

Aside from this, the visitors will be able to experience traditional tteok pounding and a game of yut with the help of staff wearing yut-like costumes. Taekwondo performances will be another highlight.

Lotte World in Jamsil, southeastern Seoul, is putting on a special Chuseok show at 8 p.m. daily through Wednesday, where audiences can enjoy samulnori, buchae (fan) dance and ganggangsuwollae.

At COEX Aquarium in Gangnam, southern Seoul, divers will reenact several folk games, including tuho, neolttwigi and tightrope walking. The show will be held at 12:30 p.m., 2:30 p.m. and 4:30 p.m. daily through Wednesday at the sardine water tank in front of the Deep Blue Plaza.

Chuseok is held on a full moon day, or Aug. 15, every lunar year, so it is among the best days to enjoy the beauty of the moon. Among the prime vantage points is the N Seoul Tower on Mount Namsan, which stands 356.16 meters (1,037 feet) above sea level. The Han River area is also recommended for viewing, especially near the Hangang Bridge and Seogang Bridge.

Not directly related to Chuseok, but for those enjoying extended holidays, the Seoul Drum Festival marking its 14th anniversary will be held on Tuesday and Wednesday at Gyeongghui Palace and the Seoul Museum of History. Six Korean and three foreign teams will perform. The foreign teams include internationally known drummer Jojo Mayer and his Nerve Project team, Exotic Percussion from Thailand and Ben Handle’s Sweet Beats.

The annual Hi Seoul Festival also starts Monday with an estimated 200 events to be held throughout the week. The opening parade will start at 6 p.m. at Cheonggyecheon and end at 9 p.m. at City Hall Plaza.