Sales of Chuseok gifts up even in gloomy economy

Sales of Chuseok gifts up even in gloomy economy 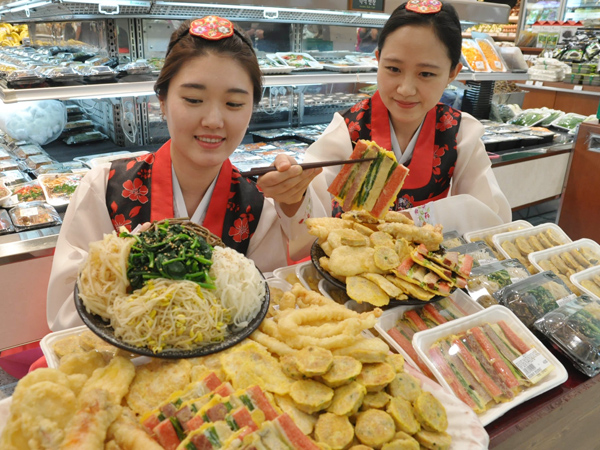 Sales girls offer traditional Korean dishes ranging from seasoned vegetables to pan-fried pollack and batter-fried shrimp at the Lotte Department Store in Busan on Wednesday ahead of the Chuseok holidays. [YONHAP]


Despite an economic climate that is cautious if not actually gloomy, retail sales for the upcoming Chuseok holiday have been buoyant.

Major department stores and large discount chains all showed growth in sales of gifts for the traditional harvest holiday of around 1 to 5 percent compared to last Chuseok.

Increased sales of affordable gift sets and bulk orders from corporate customers were the growth drivers.

The three major department stores, Hyundai, Shinsegae and Lotte, and the three large discount chains, E-Mart, Homeplus and Lotte Mart, all recorded one-digit sales growth for the week from Sept. 16 until last Sunday.

Market watchers admit that growth was weak compared to last year’s growth, but the retailers put up a good defense considering the less-than-robust economy.

Low- to midpriced home gift sets were partly responsible for the good performance.

At Hyundai, gift sets of hanwoo, or Korean beef, a traditionally popular item, showed high growth, while those of vegetables grew 16 percent and fruits jumped 14.2 percent.

“A week ahead of the Chuseok holiday, we focused on promoting economical products, as well as providing coupon booklets that gave discounts to consumers,” said Lee Heon-sang, head of food and groceries at Hyundai Department Stores.

For Lotte Department Store, sales of Chuseok gifts rose 14.4 percent. Lotte said it saw a polarization in the Chuseok gift set market, with good sales in both expensive luxury items and economical products.

Sales of a typical economical gift set at Lotte - hanwoo altteul (or thrifty) set - surged by 20 percent, while sales of the luxury beef set, which costs around 600,000 won ($539), and the hanwoo luxury set rose by 10 percent from a year earlier.

The nation’s largest discount chain E-Mart reported that sales of Chuseok gifts during a Thanksgiving sale event increased 1.3 percent compared to the same period last year. Sales of fruit sets of apples and pears grew 14.9 percent due to the unchanged price from last year.

Sales of dried yellow corvine, another traditional favorite, increased 10 percent after E-Mart introduced them at 40,000 won for the first time.

“This week, sales of high-priced fresh food products started to grow, but even among the expensive product lines, relatively cheaper products appealed to customers the most, as sales of economical gift sets are continuing for this Chuseok,” said Choi Chun-seok, general product manager at Lotte Mart.