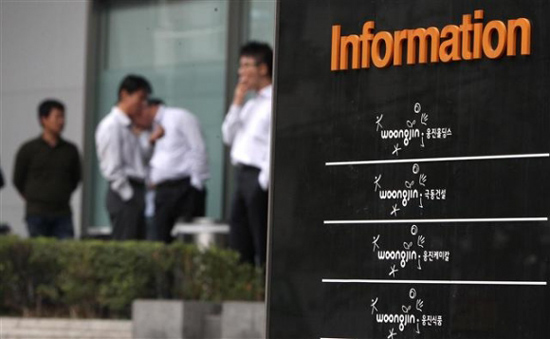 Woongjin Holdings said in a regulatory filing yesterday that its affiliate Kukdong Engineering & Construction has failed to repay 15 billion won ($13.5 million) it borrowed from Hyundai Swiss Savings Bank and has gone bankrupt.

The announcement came two days after Woongjin filed for a court restructuring program. However, controversy arose around Woongjin Group Chairman Yoon Seok-gum’s motivation after it was revealed that he paid 53 billion won that Woongjin Holdings owed to two affiliates - Woongjin Think Big and Woongjin Energy - a day before the application.

Woongjin Holdings said the payments couldn’t be described as early. It said the money was borrowed for a short period and its repayment date fell on that day.

Analysts believe the payments to the affiliates were meant to prevent them from losing money before the court receiver froze the group’s finances.

Yoon’s wife Kim Hyang-suk sold the 44,000 shares she owned in Woongjin Think Big before the prices of the shares of the publicly traded affiliates plunged sharply at the news of the bankruptcy of Kukdong E&C.

It’s estimated that the investors, creditors and subcontractors of Woongjin Holdings and Kukdong E&C are likely to lose 2.5 billion won from the court receivership process.

“The Financial Services Commission will embark on an investigation of whether there has been any misconduct within Woongjin Group, such as the early repayment of borrowings to affiliates and disposition of the largest shareholder’s stocks in the process of applying for court receivership and will take necessary measures,” said Kwon Hyuk-se, vice chairman of the FSC.