Runner hoping he will make it to Antarctica

Runner hoping he will make it to Antarctica 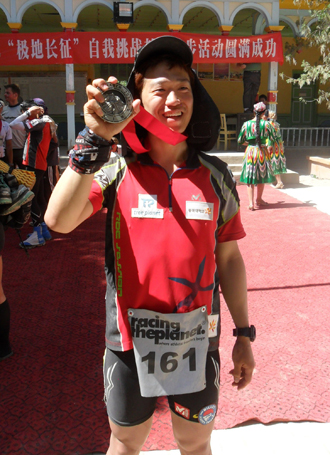 These are venues where survival itself is difficult and running long distances an ultimate test of determination and endurance. But Yoon Seung-chul has beaten all three.

And the junior in Korean literature and creative writing at Dongguk University will take it to the opposite extreme when he runs in Antarctica in November.

But for all his training and drive, the 22-year-old would not have been in the races without a social investment fund, which collects small donations from the general public.

Yoon’s interest in running was sparked when he was looking for ideas for a novel during his freshman year in 2008. When he found pictures of marathoners in deserts, he wanted to give it a shot.

Even though he limps a bit when walking because he broke his shinbone in middle school, Yoon began running five to 10 kilometers (3.1 to 6.2 miles) a day.

After his discharge from the Marine Corps after mandatory military service, Yoon completed weeklong 250-kilometer races in the Sahara Desert in October 2011, the Atacama Desert in March and Gobi Desert in June.

When he finishes the Antarctica event in November, he will complete “The 4 Deserts,” which was recognized as the world’s leading endurance footrace series by Time magazine in 2009 and 2010.

Competitors in the Antarctica race must sleep and eat on a support ship, so the cost is four times that of the earlier three events. Previously, Yoon received financial support from Dongguk University and an outdoor company, but he needs 17 million won ($15,200) for the Antarctica marathon.

“I almost gave up because of money, but I’m keeping my fingers crossed for the social fund,” he says.

Yoon posted a message on the social funding site www.fundu.co.kr that seeks donations by describing his marathon project. As of yesterday, 61 people had donated a total of 2.84 million won.

“I will run keeping the names of donors in my heart,” Yoon said. “Please support me so that I can achieve my goal with you.”