Swiss woman goes all out to help kids

Swiss woman goes all out to help kids 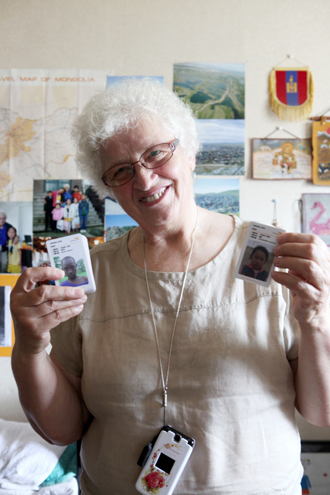 In Jin-ju holds up pictures of her sponsor kids at her home in Eumseong County, North Chungcheong. Provided by World Vision

A blue-eyed, white-haired Swiss lady, In Jin-ju (once known as Margaret Ninghetto), has dedicated her life to helping poverty-stricken children in Korea. A simple vacation here turned into a full-on relocation to the peninsula when In decided to help the nation’s less fortunate. On Tuesday, In was chosen as one of the “Happiness Sharers” by the Ministry of Health and Welfare.

In was once employed as nurse in her homeland of Switzerland, where she became acquainted with several other nurses who had hailed from Korea. By spending time with her fellow Korean co-workers, In’s growing curiosity about the Asian country led her to visit for the first time in 1975.

During her seemingly innocent trip, In came across numerous malnourished child beggars asking for a few pennies on the muddy streets, and when she couldn’t stop thinking about them even after she returned home, In began to financially sponsor them. “I couldn’t forget those poor people who kept sharing their food with the homeless even though they didn’t have enough money for themselves,” In said.

After several more visits, In decided to immigrate to Korea in 1985, and ever since she has worked in orphanages in Gwangju, Ulsan, Yongin and Gunsan. In even made her own Korean name, “Jin-ju,” derived from her real name Margaret, meaning “pearl” in Latin. “Jin-ju” means pearl in Korean.

When Korea started to rise as a more advanced country in terms of its economy and social welfare, In became interested in helping children living in neighboring countries. Since1993, In has been actively participating in the World Vision sponsorship program.

Mongolia was her first stop.

“Now that Korea has become a developed country, there are no more hungry kids or kids who have gotten sick from drinking polluted water. But in Mongolia, there are still kids who can’t go to school because they have to work,” said In.

Nineteen years ago, In was the sponsor of three Mongolian kids. Now, that number has increased to 30, and these children are from 11 underdeveloped nations, including India, Sri Lanka, Uganda and Mozambique. The sponsorship money comes from In’s pension plan that she receives from Switzerland, and every month, In donates 30,000 won ($26) per child, 900,000 won in total.

“Sponsoring these poor kids is the only thing I can do to help them have a brighter future,” she said.

In currently resides in Eumseong County, North Chungcheong, and spends her time caring for abandoned dogs.

In says that her greatest pleasure involves replying to her sponsored kids’ letters and packing their birthday presents.

In said she had a few words to say to Korean children.

“If someone around you is from a multicultural family, don’t bully them. Be friends. It would also be good if you can help poor children living in foreign countries.”