Candidates stump ahead of Chuseok

Candidates stump ahead of Chuseok


Ahead of one of Korea’s biggest national holidays, Chuseok, the three major presidential candidates are trying to set themselves apart using special campaign plans with only 80 days left in the race.

“Traditionally, Korea has a so-called ‘holiday effect,’?” Yoon Hee-woong, senior researcher at the Korea Society Opinion Institute, told the Korea JoongAng Daily. “The Chuseok holiday is the only time the generations get together and share their ideas about presidential candidates.”

Yoon elaborated on the case of Chuseok in 2006 ahead of a coming primary. 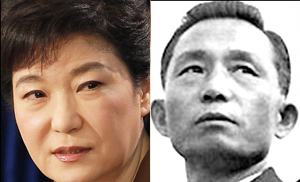 At the time, the then-opposition Grand National Party’s two strong candidates - Park Geun-hye and Seoul Mayor Lee Myung-bak - were in a neck-and-neck race before Chuseok.

However, after the holidays, Lee’s approval rating started to surpass Park’s by a large margin, about 10 percent, and he finally won the race in the end.

“At the time, children who were living in Seoul experienced the successful achievements of Seoul Mayor Lee, such as the Cheonggye Stream project, and praised him to their parents living in other regions, and that was seen as one of the factors that raised Lee’s approval ratings,” Yoon said.

The ruling party’s Park yesterday visited her traditional stronghold, Daegu, where she was born, to consolidate her longtime supporters there.

She made a visit to city hall and a local nursing home. Today, at a welfare center in the city, she will deliver a speech on the importance of welfare policies.

The DUP’s Moon visited the Korea Army Training Center in Nonsan, South Chungcheong yesterday, to cheer up newly recruited soldiers. Then he moved to Daejeon, south of Seoul, and met with travelers at the Daejeon train station.

Moon will stay in his hometown in Yangsan, South Gyeongsang during the Chuseok holiday. After Chuseok, he will move on to Busan, which many analysts see as a crucial location.

The southeast coastal city is Moon’s stronghold and hometown, where he once fought for underprivileged workers as a labor lawyer with late President Roh Moo-hyun, but many elderly people support the ruling conservative party there. Moon previously secured a geographic seat in Busan in the April 11 local elections.

On Sunday, he will visit Bongha Village, where liberal President Roh Moo-hyun jumped to his death, and pay tribute at the tomb of the president.

During the rest of the holidays, he will possibly visit Song Gi-in, a priest known as a “spiritual mentor” of the ex-president.

The independent candidate Ahn attended a forum discussing national security and unification yesterday held by his own think tank Naeil, or tomorrow in Korean. There, he said he will “upgrade” the so-called “Sunshine Policy” of former President Kim Dae-jung and policies of Roh Moo-hyun in dealing with North Korean affairs if he becomes president.

Many high-profile officials and politicians who served for the two former liberal presidents took part in the forum.

In the afternoon, Ahn met with citizens who departed from Seoul to their hometowns at the Express Bus Terminal in Jamwon-dong, southern Seoul. The already overcrowded terminal was packed with visitors and travelers who were eager to see or take a photo with the political superstar.