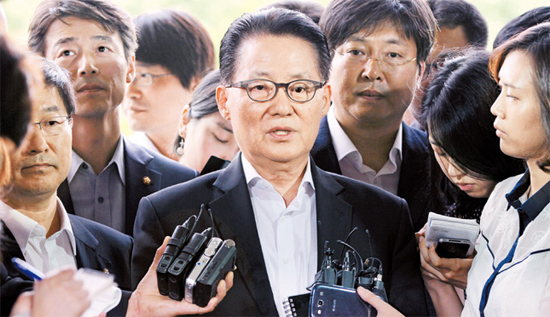 Park, who served as a chief of staff under the late former President Kim Dae-jung, is suspected of receiving a combined total of 80 million won ($72,000) from the heads of Solomon and Bohae savings banks between 2008 and 2011 in return for lobbying for the survival of the ailing lenders, said the prosecutors, wrapping up a three-month investigation.

Rep. Park is suspected of accepting around 20 million won in illegal political funds from chairman Lim Suk of the now-suspended Solomon Savings Bank in March 2008, according to prosecutors.

The three-term lawmaker is also accused of receiving 30 million won from the now-jailed former chairman of Bohae Mutual Savings Bank, Oh Moon-chol, in June 2010, in return for influence peddling on behalf of the savings bank, they said.

Oh claimed that he gave the money to Park to lobby the lawmaker to halt probes being carried out against the savings bank that was forced to close its doors in April 2010, they added.

Charges against Park also include receiving 30 million won in March of last year from Lim Kun-woo, then chairman of Bohae Brewery and a major shareholder in the savings bank, who allegedly asked Park to place a phone call to top financial regulator Kim Seok-dong after the bank’s operations were suspended.

Park allegedly called the financial regulator on the spot, they added.

Kim, as chairman of the Financial Services Commission, was in a position to delay the financial watchdog’s final assessment of the bank’s solvency.

The lender, however, was eventually absorbed into Yes Savings Bank.

Park, who had also served as a culture minister under former President Kim Dae-jung, was previously indicted in 2003 on charges of taking slush funds from Hyundai Group right before the historic inter-Korean summit in 2000 but was cleared of the charges by the Supreme Court.

He was also sentenced to three years in jail for receiving kickbacks from several local conglomerates and released from prison under a special pardon in 2006.

Park became the floor leader of the center-left party in May of this year.