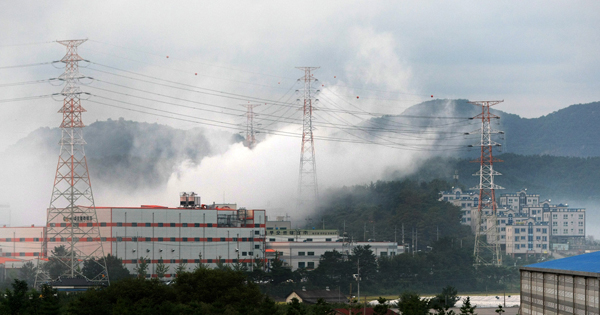 Gas fumes billow up into the sky after a leak at a factory in the Gumi National Industrial Complex in Sandong-myeon, North Gyeongsang, which resulted in five deaths and 18 injuries. Firefighters and police implemented emergency decontamination procedures in the area yesterday as hydrofluoric acid leaked from the site. By Gong Jeong-sik


A gas leak in a chemical plant at the Gumi National Industrial Complex in North Gyeongsang on Thursday led to five deaths, while 18 others were hospitalized after exposure to the gas.

Firefighters conducted decontamination operations in the area while police began questioning the factory’s management to find out the cause of the accident yesterday.

Firefighters said the leak occurred Thursday at 3:43 p.m. at a Hube Global plant when a 20-ton tank truck loaded with toxic hydrofluoric acid was connected to a hose to transfer the contents to a tank within the factory.

Police said the leak was likely caused from increased pressure within the storage tank or in the hose during the transfer process. Gas fumes billowing out from the factory located in Sandong-myeon, Gumi, could be seen from miles around.

The five laborers working on the truck died from exposure to the gas - four were employees of the factory, but one was a repairman who was visiting to fix drum pumps.

Other victims, including workers around the industrial complex and residents of the neighborhood who inhaled the gas, were transferred to nearby hospitals.

Hydrofluoric acid, while colorless, has a pungent odor and is a corrosive acid that can cause irritation, and in some cases, permanent damage to the eyes and lungs.

Because of possible danger from the leaked toxic gas, police immediately implemented emergency measures in the area.

Police ordered some 600 residents within 300 meters (328 yards) around the area to evacuate to facilities at least 10 kilometers (6.2 miles) away from the site.

Even in apartment complexes 1.5 kilometers away from the site of the leak, the toxic gas was detected. Gas masks were handed out to some 700 workers in the area.

“Starting from 8 p.m., I began to smell something and a hazy gas filled the apartment,” said Jo Gi-jun, head of the apartment’s management office.

Gumi firefighters and emergency workers employed water hoses to contain the spreading gas. Likewise, the police blocked people and cars from entering within a 700-meter radius of the explosion site.

Sixteen schools in the vicinity were closed down yesterday ahead of the Chuseok holiday weekend.

Experts from the National Institute of Environmental Research inspected the site, after which the Gumi City Government and firefighters employed 20 emergency workers to decontaminate the factory and neighborhood, spraying counteragents to neutralize the gas yesterday afternoon.

“Because it is highly poisonous, it is important to block the leakage of the gas and to get rid of the toxic substance using counteragents. If skin comes into contact with the gas, it helps to wash it off with water.”

The National Forensic Service and police began further inspection of the site yesterday and will question Hube Global’s managers regarding whether safety regulations were followed at the factory.

The 4,060-square-meter (one acre) Hube Global Gumi Factory opened in August 2008 and mainly produces hydrofluoric acid alongside phosphoric acid, sulfuric acid and glycerin, and has an annual output of 9,000 tons.