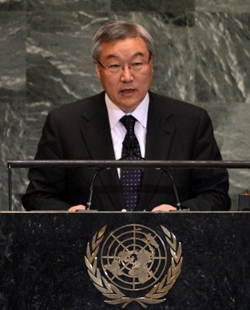 In a thinly-veiled swipe at Japan, South Korea's top diplomat urged the world to make utmost efforts to end "wartime sexual violence" and exhorted any offender to face "the dark side of its history and rectify past wrongdoings."

Although Kim did not mention Japan by name or directly refer to historical issues raising tensions with Tokyo in his speech, such as so-called "comfort women" and Dokdo, it was the first time South Korea has raised such issues at the U.N. assembly. (Yonhap)