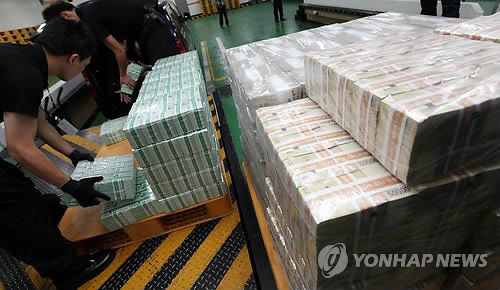 South Korea's national debt will likely grow 19.6 trillion won (US$17.6 billion) in 2013 from this year due to an increase in state bond issues, a government report showed Tuesday.

According to the report by the finance ministry, the country's national debt is forecast to reach 464.8 trillion won next year, up 4.4 percent from 445.2 trillion won estimated for this year.

Despite increasing national debt, its ratio to the country's gross domestic product (GDP) will likely decline going forward thanks to the continued economic growth.

The report showed that the country's debt-to-GDP ratio will decline to 33.2 percent next year from 34 percent estimated for this year. It is expected to fall further to 29.9 percent and 28.3 percent in 2015 and 2016. (Yonhap)