Despite tough season, Nexen has its heroes

Despite tough season, Nexen has its heroes 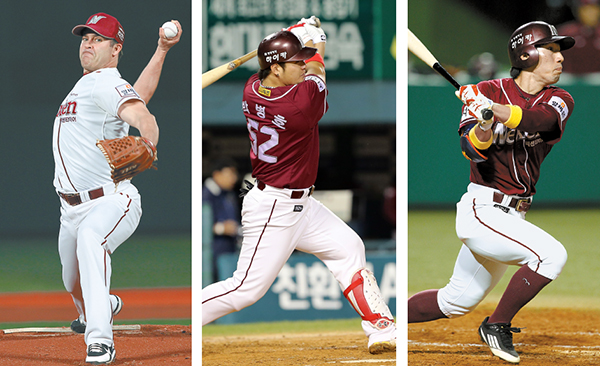 
The Nexen Heroes once again won’t be making the playoffs, as the four-year-old team is poised to finish sixth among eight with only two games left in the season. But the Seoul team still has a good shot at making an impact on the season - thanks to individual performances by their top players.

Pitcher Brandon Knight and batter Park Byung-ho were included on the four-man shortlist for the Most Valuable Player of 2012, announced by the Korea Baseball Organization yesterday.

That gives the Heroes a chance to sweep the two biggest awards, a rare honor that has only occurred four times in the 31-year history of the professional baseball league.

In 1985, the MVP award was given to Kim Sung-han and the Rookie of the Year award was given to Lee Kang-chul, both of the Haitai Tigers, the predecessor of the Kia Tigers. In 1993, the awards were given to Kim Sung-rae and Yang Joon-hyuk of the Samsung Lions. In 2006 the Hanwha Eagles ace Ryu Hyun-jin received both awards and the 2007 awards were given to Doosan Bears’ Daniel Rios and Lim Tae-hoon.

It is also unusual to see the MVP awarded to a player from a team which failed to advance to the playoffs. The last time that happened was 2005 when Son Min-han, the Lotte Giants ace, won MVP for the second year in a row. The Giants finished fifth in the 2005 season.

Knight recorded 16 victories for the season, tying for most wins with Jang Won-sam of the Samsung Lions, who also made the MVP shortlist. The 37-year-old American Knight, who is having his best season in his four-year stint in the KBO, is also leading in earned run average (2.20) and quality start (27). The other candidate for MVP is Kim Tae-kyun of the Hanwha Eagles.

Seo, 23, recorded 39 steals for the season, second-most in the league, and is considered the favorite to win the rookie award. Lee Ji-young of the Lions, Park Ji-hoon of the Tigers and Choi Sung-hoon of the Twins are the other candidates for the Rookie of the Year award.

The winners of the two awards will be decided in a vote by the KBO member media outlets by Monday and announced after the Korean Series next month.