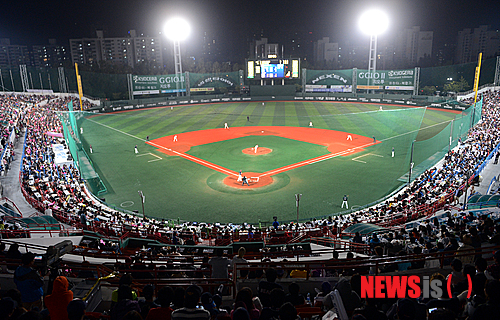 South Korea's top baseball league said on Tuesday it has surpassed 7 million fans in single season attendance for the first time in its 30-year history.
The Korea Baseball Organization (KBO) said it reached the milestone at the start of the league's four games Tuesday.

The league estimated that 39,200 fans went to the four games that started at 6:30 p.m., with the official tally set to be released later Tuesday.

On Sept. 25, the KBO broke the single season record with 6,812,530 fans, up from 6,810,028 fans last year. It marked the fourth straight season in which the league set new attendance marks. According to the KBO, 111 games through Monday, or about 21 percent of all games, had sold out.

The eight KBO teams each play 133 games a season.

Among individual clubs, the Lotte Giants this year became the first KBO team ever to draw more than 1 million fans for five straight seasons. They had attracted 1.37 million home fans through Monday.

The Doosan Bears and the LG Twins, the two Seoul-based teams who share Jamsil Stadium as their home, ranked next with 1.26 million and 1.23 million, respectively.

The SK Wyverns were fourth with 1.05 million fans, as they enjoyed their first season with at least 1 million home fans.

These four teams are based in the league's three largest stadiums. Lotte's home, Sajik Stadium in Busan, sits 28,500, followed by SK's Munhak Stadium in Incheon with 27,800 and Jamsil with 27,000. Of the four, SK and Doosan are playoff bound, while Lotte sits one victory away from joining them in the postseasn. LG, stuck in seventh place, hasn't been to the postseason since finishing runner-up in 2002.

The Samsung Lions, the defending KBO champions, on Monday clinched the first place in the regular season. They played at the 10,000-seat Daegu Baseball Stadium, which opened in 1948 and remains one of the league's most decrepit ballparks.

Baseball's popularity has been bolstered by South Korea's success at recent international competitions. The country won the gold medal at the 2008 Beijing Olympics and finished runner-up to Japan at the 2009 World Baseball Classic.

In 2008, the teams drew 5.25 million fans, surpassing the 5-million mark for only the second time in league history, and the figure reached 5.92 million the next season. In 2011, 6.8 million fans went to see their favorite baseball clubs in action.

For next season, the expansion NC Dinos, based in Changwon, South Gyeongsang Province, will join the KBO. The schedule will expand from 532 games to 576 games in 2013. [Yonhap]