The combined net loss of 92 local savings banks reached 1.16 trillion won (US$1.04 billion) in the year ended on June 30, a 2.9-fold increase from the previous year, according to the data by the Financial Supervisory Service (FSS). The figure excludes six newly-established savings banks.

Of those tallied, 26 players suffered net losses for two consecutive years, with another 10 having negative net worth, FSS data showed. The data also showed that 43 banks, or 46.2 percent, are in the red.


Affiliates of Hyundai Swiss Savings Bank posted the largest loss of a combined 99.7 billion won in the period, data indicated. 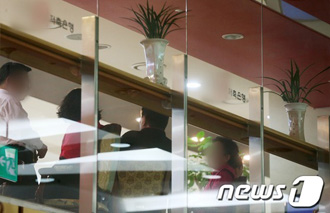 Thirteen savings banks had capital adequacy ratios below the 5 percent required by the government as of June, and the majority of them are subject to liquidation as their ratios were less than 1 percent.

"We will start an inspection if they (their capital adequacy ratios) keep staying short of the required level. A capital ratio below 1 percent with an insufficient net asset will lead to a business suspension," said Ahn Jong-shik, the head of FSS savings bank supervision division.

Market analysts forecast such a rapid asset deterioration by savings banks could spur the country's financial watchdog to initiate another round of an industry overhaul.

"We've called on large shareholders to conduct rights offerings to bolster their financial health. If that again fails to work, some will have to be liquidated," an FSS official said.

Last year, the Financial Services Commission suspended operations of 20 ailing savings banks due to their poor asset quality, setting up a so-called "bridge bank" to be run by state-run debt-clearer Korea Depository Insurance Corp. to manage the restructuring.

Based on the fiscal 2011 performance, the FSS said it plans to set out follow-up steps, urging troubled banks to secure capital and draw plans to help themselves.

The average bad debt ratio for the tallied savings banks soared to 20 percent from 17.4 percent over the cited period, the FSS data showed. [Yonhap]