Gyaru Sang sings for Dokdo and entertains fans with ‘Animunida’

Gyaru Sang sings for Dokdo and entertains fans with ‘Animunida’ 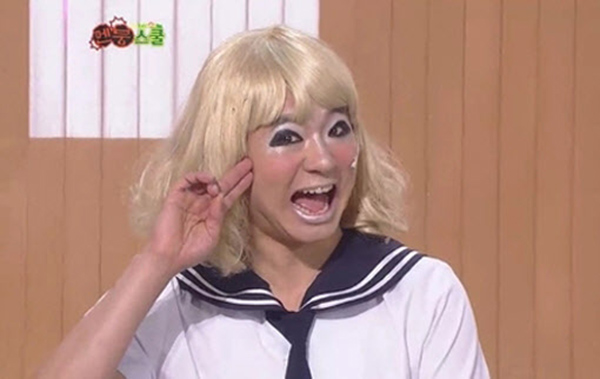 
Gyaru Sang, a schoolgirl character in KBS 2TV’s “Gag Concert” played by Park Sung-ho in his popular cross-dressing skit, launched a two-track EP called “Animunida” on Friday. The eponymous title track, one of Gyaru’s oft-sung catchphrases, is a comical mixture of the Korean word for “no” with a Japanese twang. It boasts an electronic sound and was produced by composer Groovin. Lyrics contain a political element with the message “Dokdo is ours” woven in.

Conforming to her on-screen persona, Gyaru described the second song as “neither rap, nor a song, nor music.”

On Melon, one of the nation’s most popular music download Web sites, users gave the mini-album 4.5 stars out of five.

“Gyaru” is a Japanese word that refers to a fashionable girl, typically with heavily bleached hair, excessively decorated nails and heaps of makeup.