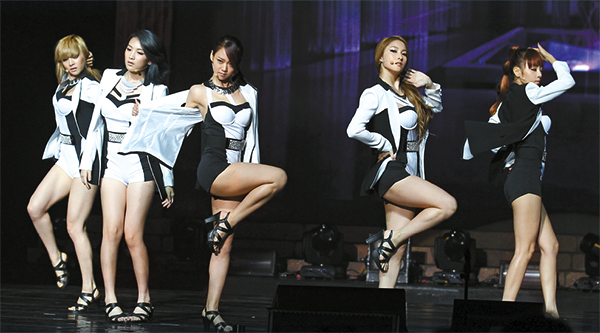 
Back with its new EP “Pandora,” five-member girl group KARA is here, there and everywhere. The girls have been especially successful in Japan: Last year alone, the group won Japan’s Golden Disc Award, K-pop Lovers! Award and Japan Record Award.

Every EP released since KARA’s Japan debut has been a hit. A line of dolls based on the girl group has been launched and the K-pop stars are the faces of various perfumes and food companies.

KARA’s success can be attributed to the hard work of its members, as well as the talent behind the scenes. But the ride with DSP Media, its agency, hasn’t always been smooth.

In this fourth installment of the Korea JoongAng Daily’s Inside K-pop series, we explore how the successful group came to be and the role its agency DSP Media played in the unexpected rise.

As a smaller agency compared to its competitors YG, SM and JYP, DSP Media doesn’t hold annual concerts featuring a star-studded lineup of K-pop acts. Founded by Lee Ho-yeon, the agency is not a household name, but most would recognize the groups that it has churned out from the early 1990s. Before KARA, Rainbow and A-Jax, there were Sechs Kies, Fin.K.L and SS501.

But most struggled to stay in the spotlight. KARA hopes to buck the trend.

“Apart from Shinhwa, only a handful of idol groups have made it past the four-year mark of relevance like Super Junior, Girls’ Generation, the Wonder Girls and of course KARA,” says Yun Heung-kwan, director of DSP Media.

Unlike its three better-known contemporaries, DSP has not laid its eyes on a global audience - the agency focuses on the quality of its talents and the formation of idol groups rather than on marketing gimmics. This has been a pillar of its K-pop model, for better or worse.


The making of KARA

In 2005, when the agency decided to launch a girl group, it wasn’t as easy as you’d imagine.

“With the first round of auditions, we were really unimpressed,” Yun says.

This led DSP to think outside the box, with the agency tapping into its vast Hallyu network.

Han Seung-yeon was eventually recruited through a dance school which trains Lee Hyori’s backup dancers. Park Gyu-ri, a child actor, was introduced to DSP through another agency. Nicole Jung was introduced to the agency by a mutual friend when the agency heads were visiting the United States.

“A native English speaker is needed in this day and age, so we recruited Nicole for that reason.”

In its initial stages, there was another member named Kim Sung-hee, who was a trainee at DSP from middle school. When she left, Goo Ha-ra joined the band through an audition. Then came Kang Ji-young, who was introduced by NS Yoonji, a relative.

If talent was the only thing DSP was looking for, then NS Yoonji would rightfully be a part of KARA today.

But when the 24-year-old soloist came in for an audition, she was told that she didn’t exactly fit in with the group’s vibe. She then recommended her younger cousin.

With a minor reshuffling KARA spent just two months training before it launched its second album, and debut for its current members, “Rock You” in 2008. Needless to say, it wasn’t an easy few months.

The plight of trainees is drawing more and more attention today as idol group members give their accounts of the training process once they make it big. Every aspect of a potential talent is scrutinized, from his or her age to looks, vocal, dancing skill and ability to connect with future audiences.

“With all things, we ask the simple question, ‘Will they fit in with the group?’?” Yun says.

The director says that a potential star’s “it” factor, or his or her ability to relate to the audience, also plays a big part in the auditions.

“Being a singer is all about entertaining the masses, but if a candidate can’t stand in front of a crowd and sing, then there really isn’t much that we can do for them.”

“Trainees are not celebrities, and we instill that in them,” says the PR manager, Cha Hee-jin. “In many ways, trainers are harsh on them like teachers would be to students.”

Like many other agencies, DSP boasts a new talent development team that manages casting and auditions which take place once a month.

Every month, 150 hopefuls register their interests online, but only about 20-25 make it through. Final cuts are even harsher, with only a handful moving on to become DSP trainees.

Currently, there are about 20 trainees who clock in at DSP after school. Although the agency doesn’t pay its trainees, it does offer benefits and incentives such as rebates on gym memberships.

The trainees - both those who come in at 1 p.m. and at 3 p.m. - spend about five to six hours training in dance and vocals.

To equip them with the skills needed to reach its biggest target market, Japan, the trainees are also given Japanese language lessons.

In terms of the private lives of the trainees, the agency does try to moderate it to a certain degree.

“Like with any other adolescents, when trainees start dating, they lose a lot of time with which they could be spending on rehearsals, so we don’t really endorse it,” says Yun, who makes time to pull trainees aside to reprimand them if they are seen making moves rather than rehearsing new dance moves.

Despite this, Yun acknowledges that kids are kids, and you can’t really keep puppy love from blossoming.

After all, DSP is one of the few agencies that has a talent who is in a public relationship with a fellow idol group member.

“After much deliberation, we told them, best of luck,” he says, looking back on the time when the paparazzi snapped a picture of the two together.

Yun says that he has the “changing times” to thank for the somewhat relaxed policies of dating between idol groups.

“Ten years ago, it would have been fatal [for their careers], but now the relationships among fans and idol groups are changing.”

In fact, many a time, Goo has received support letters from fans rather than death threats.

“One time, a fan from abroad handed Ha-ra a letter with hearts and the words ‘Ha-ra for Jun-hyung’ on it.”

Yun says that the agency is always keeping up with what the fans are thinking, and decisions follow soon after.

“We monitor what’s going on online so we know how to react. Even with issues like cosmetic surgery, you would just look like a fool in today’s society if you denied that entertainers had work done.”

The agency says that KARA’s success in Japan was a bit of a fluke, but how they capitalized on it with endorsement deals rolling in was creatively reactive. Due to its unexpected success in Japan, the group spends about 45-50 days of the year there.

Instead of coming up with a marketing plan for overseas markets, as a lot of bigger agencies have done, DSP maintains its focus on group formation.

“Of course when selecting idol group members these days they look for language abilities, vocals, rap and dance skills. Like other agencies, we look for these things too, but our point of difference is that we look for specific attributes that each member can bring.”

Yun boasts that even physically, unlike many other girl groups, KARA members all have their unique appeal.

In terms of what they bring to the group, Jung raps and speaks fluent English; Han and Park are vocalists; and Goo and Kang are the best dancers.

Looking to the future

Through the feats of its artists, DSP says that it hopes to gain momentum in the K-pop industry and eventually expand its operations across the globe.

“Today the music environment is changing and many fans of bands become fans of agencies,” says Cha, the PR manager who has seen her share of fan letters and bizarre propositions.

She added that it helps to see agencies as brands.

“If you like Apple, then you tend to buy a lot of Apple goods, and it’s the same for the entertainment industry.”

Apparently this philosophy works for recruiting talents too.

“There are some who will go to auditions at a specific agency every two months,” Yun says. “It has a lot to do with a sort of mental fixation that a hopeful has.”

One member from A-Jax, Jae-hyung, was such a case.

He had idolized Kim Hyun-joong of SS501 and came to DSP to follow in his stead.

“He said at the audition, ‘I want to make it here at DSP because Kim Hyun-joong is my role model.’ Even to this day, he raves about the agency during various interviews.”

DSP says that later on, it wouldn’t be out of line to see a branch open up in America.

“With focus on our brand name, we hope to expand little by little, with a new studio and taking on more employees,” Yun says.

As the agency makes a steady progress, it believes that time is and will continue to be on its side.

“The thing is that the music industry is fluid. Back in the ’90s, the Korean music scene was dominated by Western pop,” Yun says.

“But now, it’s the other way around. In the United States, people are listening to K-pop and so there really has never been a time like this for Korean artists.”