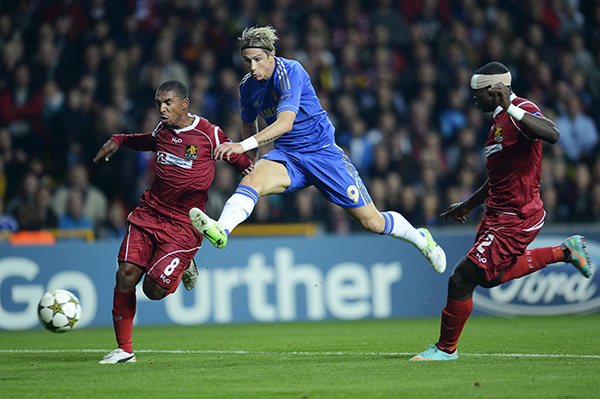 
LONDON - Belarussian side BATE Borisov caused one of the biggest shocks ever seen in the Champions League when they stunned last season’s beaten finalists Bayern Munich 3-1 on Tuesday.

The other likely title contenders all won with European champions Chelsea easily beating FC Nordsjaelland 4-0 away while Barcelona saw off Benfica 2-0 in Lisbon but lost Carles Puyol with a dislocated elbow before Sergio Busquets was sent off.

Like Barca and BATE, Manchester United maintained their perfect start with a come-from-behind 2-1 win over CFR Cluj in Romania where Robin van Persie scored both their goals.

The game between Juventus and Shakhtar Donetsk, both regarded as dark horses in this season’s Champions League, finished 1-1 in Turin where the Italian side chalked up a European competition record of eight successive draws.

There were wins for Valencia, who beat Lille 2-0 to condemn the French side to a second successive defeat, while Celtic ended a run of 20 Champions League away matches without a win after a last-minute 3-2 triumph at Spartak Moscow.

Braga, in contrast, maintained their fine European record on the road, winning 2-0 at Galatasaray to remain unbeaten in seven matches away from home.

The biggest upset was in Minsk where BATE earned their first ever Champions League home victory as they beat a Bayern side who had won their last nine matches in all competitions.

Bayern dominated the first half, hitting the post through Toni Kroos, but they ran out of ideas as BATE chalked up an unexpected win against the four-time European champions.

Goals from Aleksandr Pavlov, Vitali Rodionov and Renan Bressan gave the BATE a famous victory and all the Bavarians had to show for their efforts was a late Franck Ribery goal to pull the score back to 2-1 in the closing stages.

However, the Belarus champions still had time to score again through Bressan deep into stoppage time.

The victory took BATE to the top of Group F after they had recorded their first ever win in the competition by the same score against Lille two weeks ago. Valencia are level with Bayern on three points and Lille are bottom with none.

BATE midfielder Aleksandr Hleb said: “This was a sensational result for us. We will celebrate for a bit but we need to keep working hard. Bayern are still favorites in our group.”

Unlike Bayern, holders Chelsea brushed aside the debutants of FC Nordsjaelland in Group E in Copenhagen with Juan Mata netting twice and David Luiz and Ramires also scoring - although three of their goals only came in the last 11 minutes.

Chelsea keeper Petr Cech made an important save after 73 minutes when he turned a shot from Joshua John on to a post to preserve their lead.

Minutes later Luiz scored from a free kick, prompting a defensive collapse from the Danish champions.

“We were looking for the second goal to close the game off, but they had nothing to lose,” said Chelsea coach Roberto Di Matteo as he commended Cech for his save.

Kasper Hjulmand, Nordsjaelland head coach, added: “It could have been fun to see the score 1-1 - to see what would happen.”

Chelsea’s win, and Juventus’s draw with Shakhtar in Turin, left them top with four points, the same as the Ukrainians. Juve have two and the Danes are bottom with no points and no goals.

Barcelona’s rivalry with Benfica goes back to the 1961 European Cup final which the Portuguese side won 3-2.

Barca have not lost to Benfica in five European meetings since and won Tuesday’s Group G game, though Puyol’s injury has ruled him out of Sunday’s Clasico with Real Madrid.

Goals from Alexis Sanchez and Cesc Fabregas left the Catalans top with six points from their two games - two points ahead of Celtic who won a thriller in Moscow.

Benfica have one point and Spartak none after the Russians held a 2-1 advantage against Celtic early in the second half before having Juan Insaurralde sent off in the 63rd minute which handed the initiative to the Scots.

Manchester United also came from behind to win at Cluj who took the lead after Pantelis Kapetanos capitalized on some poor defending after 14 minutes.

Van Persie equalized with a goal that came off his head and shoulder 15 minutes later before scoring a sublime second with the outside of his left foot after 49 minutes.

United top Group H with six points, followed by Cluj and Braga on three and Galatasaray with none after a second successive defeat.