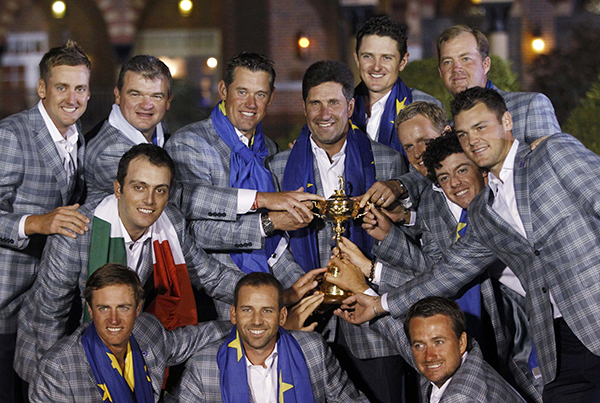 Team Europe golfers pose with the Ryder Cup after the closing ceremony of the 39th Ryder Cup at the Medinah Country Club in Medinah, Illinois, Saturday. [REUTERS/YONHAP]


MEDINAH, Illinois - The PGA Tour supplied the best tonic possible Tuesday to cure the Americans of a Ryder Cup hangover.

It staged a news conference to mark the official one-year countdown to the Presidents Cup, the one team event that Americans still seem capable of winning. Then again, it was held at Muirfield Village, where in 1987 they lost the Ryder Cup on home soil for the first time. It hasn’t been the same since. These days, the closest the Americans ever get to that 17-inch trophy is the emblem on team uniforms.

Europe now has won seven of the last nine times in the Ryder Cup, and the only reason the dominance isn’t even greater is because Justin Leonard knocked in a 45-foot putt on the 17th hole at The Country Club. The other win was in 2008 at Valhalla in Kentucky, even though the Americans didn’t have Tiger Woods. Or maybe they won because he didn’t play.

The immediate question is who the PGA of America will select as the next captain, but that’s assuming the decision will have a bearing on the outcome. In some corners, the captain’s role is overrated - until a team loses, and the fans and media need someone to blame.

It’s worth looking back with a few observations about one of the best Ryder Cup competitions ever.

Rory McIlroy is a sure thing

Boy Wonder might be the only guy who can roll out of a bed and win a singles match at the Ryder Cup. McIlroy didn’t sleep in, he just got the time zones mixed up. But there was a feeling that whoever the Americans had facing him didn’t stand a chance. Jim Furyk referred to McIlroy as the “present day Tiger Woods,” and he might be right. Even with the match all square, there was never a sense that McIlroy was going to lose.

Man of the match

Martin Kaymer holed the putt that clinched the Ryder Cup for Europe, but there was no mistaking its star. Ian Poulter became the first captain’s pick to go 4-0, and he might have won them all if Jose Maria Olazabal had not held him out Friday afternoon.

Tiger Woods as the anchor

Curtis Strange was criticized in 2002 for sending out Woods in the 12th and final match Sunday at The Belfry for two reasons. His point might be irrelevant at that stage (it was) and he would not be able to contribute to any momentum from an earlier spot in the lineup. Davis Love III did the same at Medinah. Woods actually was in the right spot. He just didn’t deliver.