Visitors pass by Woongjin Group’s headquarters in central Seoul. The group faces the biggest challenge in its 32-year history. [YONHAP]


The recent controversy surrounding Woongjin Holdings is deepening as its creditors are strongly opposing a bid by Yoon Seok-keum, the group’s founder and chairman, to apply to manage the debt-ridden company. 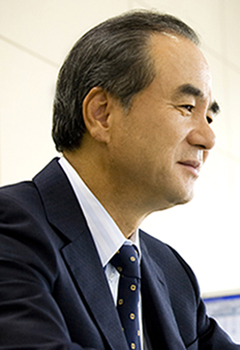 When Woongjin Holdings applied for court receivership last week, Yoon listed his name as the co-CEO of the company. This indicates that Yoon, as the owner of a conglomerate, would take full responsibility for running the ailing company.

But creditors including Woori Bank and Shinhan Bank have opposed the move, which they see as a manipulation of loopholes in the legal system.

The creditors plan to hold a meeting with the presiding judge at the Seoul Central District Court tomorrow to formally issue their demands. However, there is no legal precedent for them to prevent Yoon’s appointment as the de facto manager of a debt-restructuring program.

The creditors are also considering requesting that Woongjin Coway, another subsidiary that makes water purifiers, be sold off immediately to repay some of the group’s debts to the financial industry. They may also put the holding company up for sale, according to insiders.

“Chairman Yoon’s credibility is low because of his past actions,” said a high-ranking official at one of the creditors. “We do not want the court to appoint him [to run the company], but if that proves impossible, we at least hope to see someone else take over the debt-restructuring process.”

The creditors believe Yoon is trying to buy time to delay paying back debts for as long as a decade while also keeping hold of the profitable water-purifying business. 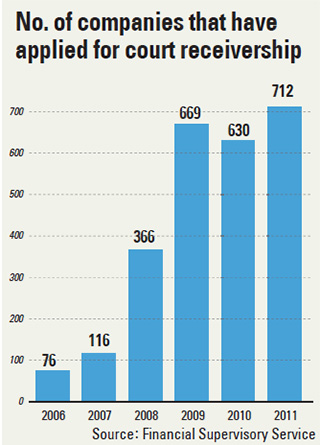 One of the reasons the creditors are up in arms is because they suspect Woongjin is deliberately manipulating the court-receivership program, which hands more managerial power to companies that file for this than to those that request simple workouts.

Since 2006, the former guarantees the management rights of the largest shareholder unless there has been a serious breach of the law. In contrast, workout programs allow creditors more control.

Court receivership also puts all financial transactions, including payments owed to smaller contractors, on hold, whereas workouts still require that such debts be fulfilled.

The system was designed for the sake of efficiency as it can speed up the process of restructuring if someone who knows the company inside-out is placed in charge. Due to the various benefits it offers, companies suffering from liquidity crunches are increasingly applying for it, with their number swelling from 76 in 2002 to 712 last year.

“It looks as though Woongjin Group is trying to buy time to normalize its operations, while deliberately avoiding repaying its 1 trillion won [$896.51 million] of debt,” said a source in the financial industry, who requested anonymity.

Suspicions surfaced as MBK Partners, a local private equity fund, was planning to pay 1.2 trillion won to acquire Woongjin Coway on Friday. However, Woongjin Holdings filed for bankruptcy two days before the payment was due.

After it came to light that Kim Hyang-sook, Yoon’s wife, sold off shares in Woongjin affiliates right before the holding company applied for a court-managed restructuring program, another Woongjin executive was found to have taken similar action.

According to the Financial Supervisory Service, Cho Jung-hyun, an executive at Woongjin Coway, sold his 82 percent stake in the company for 168 million won just before the holding company requested court receivership. The share price of the water-purifier unit has been falling since Sept. 26. Yesterday, it dropped by another 2 percent to close at 30,150 won.

Meanwhile, Woo Jung-min, an executive at Woongjin Holdings, was found to have sold 24,000 shares in Woongjin Coway between Aug. 27 and Sept. 19, earning roughly 970 million won.

Yoon’s family stands accused of profiting unfairly before the stock prices of Woongjin Group affiliates retreated due to the announcement of court receivership. From Sept. 24 to 25, Kim sold all of her 44,781 shares in Woongjin Group’s education business, Woongjin Think Big. She pocketed 400 million won, and is estimated to have escaped a potential loss of around 50 million won.

According to a local stock broker, from Sept. 25 to 26, the share prices of Woongjin Group affiliates rose between 4 and 14 percent on rumors that it would soon sell off its polysilicon business.

Investors have been heavily hit as many saw Woongjin Holdings as having a high credit rating, failing to recognize its liquidity squeeze.

The company sold commercial papers worth about 100 billion won to investors between July and August. It sold 30 billion won on July 31, the same amount on Aug. 1 and 40 billion won on Aug. 2. The debts mature from the end of this year to early February.

Kwon Hyouk-se, governor of the Financial Supervisory Service, ordered his employees last week to look into whether there were any irregularities during the company’s application for court receivership.