Major presidential candidates from the ruling and opposition camps are still running close to neck-and-neck, with popular support for independent Ahn Cheol-soo falling slightly during the crucial Chuseok holidays, a poll showed Tuesday.

The survey of 1,000 adults nationwide conducted by the Chosun Ilbo and Media Research on Monday found that the ruling Saenuri Party's hopeful Park Geun-hye and her rival candidate of the main opposition Democratic United Party (DUP), Moon Jae-in, have made some headway, while Ahn, the software entrepreneur-turned-independent contender, suffered a setback.

The polls taken on the last day of the three-day holiday can be seen as a barometer of public sentiment with the presidential campaign going into high gear ahead of the Dec. 19 poll.

Chuseok, considered the Korean equivalent of Thanksgiving Day, is one of Korea's biggest traditional holidays and is important to politicians during an election year because it allows family and friends to exchange views on candidates. This year's Chuseok fell on Sept. 30. [Yonhap] 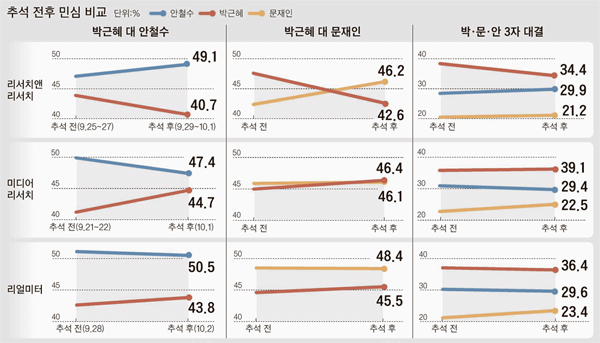