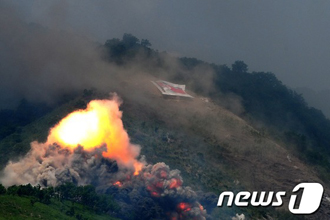 A senior North Korean diplomat on Monday warned of a nuclear war on the peninsula, saying it has become the most dangerous zone in the world.

"Since taking office, the current South Korean government led to the worst situations in North-South relations by making all inter-Korean agreements null and void, including the June 15 Joint Declaration and Oct. 4 Declaration," he said.

Pak was referring to two inter-Korean summit deals in 2000 and 2007, which called for nascent measures toward reconciliation on the peninsula and expansion of economic cooperation between the capitalist South and the communist North.

The South "rubbed salt into the wound" of the northern people and caused them to feel shame and political terror, he claimed.

He also reiterated Pyongyang's criticism of the U.S. policy.

"Today, due to the continued U.S. hostile policy towards the DPRK, the vicious cycle of confrontation and aggravation of tensions is an ongoing phenomenon on the Korean Peninsula, which has become the world's most dangerous hot spot, where a spark of fire could set off a thermonuclear war," Pak said.

DPRK is short for the Democratic People's Republic of Korea.

He used much of his speech in the 193-nation assembly's annual meeting to extol the Kim Jong-un regime. Pak also argued that his country has a "mighty weapon to defend" its sovereignty.

"Our dear respected marshal, Kim Jong-un, is firmly determined to make our people, who have overcome manifold hardships, enjoy a happy life to their heart's content in a prosperous, socialist state," he said.

Inter-Korean relations are said to be at the nadir amid North Korea's repeated provocative acts, highlighted by a nuclear test in 2009 and a couple of deadly attacks on the South that killed a total of 50 soldiers and civilians, since the Lee administration was inaugurated in 2008.

Meanwhile, in a Friday speech at the Foreign Ministers' meeting of the G-77 at the UN, Pak said that North Korea is improving its economic structure as it seeks international exchanges and cooperation.

"Following the trend of global economy toward sustainable development and green growth, our country is continuously improving and strengthening the economic structure and development methodology to suit our conditions and is actively encouraging international exchanges and cooperation in this area," according to the speech carried by the North's Korean Central News Agency.

It was unusual for a North Korean diplomat to speak of an economic affair at a UN meeting.

Since taking over power after his father, Kim Jong-il, died late last year, the new leader Kim has repeatedly stressed the importance of rebuilding the North's broken economy.

North Korea "will continue to actively contribute to achieving the common cause of the G-77/China for the establishment of new economic relations based on justice, equality and impartiality," Pak said in the speech. [Yonhap]