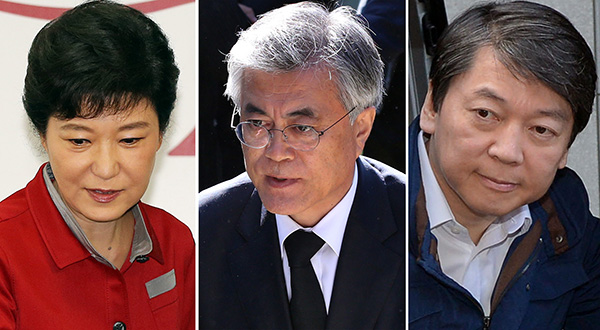 
The percentage of undecided voters in the upcoming presidential election has dropped compared to previous elections, recent poll data showed.

According to a public poll conducted by Realmeter on Tuesday, in a hypothetical three-way race, the ruling Saenuri Party’s presidential candidate Park Geun-hye was in the lead with an approval rating of 36.4 percent, followed by liberal independent candidate Ahn Cheol-soo and main opposition Democratic United Party’s candidate Moon Jae-in.

The approval rating of Ahn and Moon was 29.6 percent and 23.4 percent, respectively.

The poll showed that only 4.1 percent of eligible voters surveyed responded they have not yet decided to support a presidential candidate or do not know who to vote for.

Undecided voters - who are mostly centrist and do not have a party preference - are considered important because they have a direct impact on poll numbers, which can affect the election outcome. Most of the campaign efforts of presidential candidates ahead of the election are focused on winning the hearts and minds of these swing voters.

In a separate poll conducted by the JoongAng Ilbo on Sept. 24, the percentage of undecided voters was 4.5 percent, which is also significantly lower than polls from previous elections. In the poll, the approval rating of Park was the highest at 43.3 percent, followed by Ahn with 31.8 percent and Moon with 20.4 percent.

There were more undecided voters in the past.

In a JoongAng Ilbo poll conducted on Oct. 16, 2007 after the Chuseok holiday ahead of the election, Lee Myung-bak, then presidential candidate for the Grand National Party, had secured an approval rating of 46.8 percent, while Chung Dong-young, the runner-up for the United New Democratic Party was at 14.8 percent, and Moon Kook-hyun of the Creative Korea Party, 6.4 percent. The poll showed that 32 percent were undecided. Lee was leading the race by a wide margin and many of the centrists and non-party affiliated voters as well as opposition party supporters decided not to vote. The voter turnout was 63 percent, the lowest turnout in a presidential race.

Even in the 2002 presidential election, there were more swing voters. A JoongAng Ilbo poll conducted on Oct. 14, 2002, showed that 13.7 percent were undecided voters.

Experts point to the so-called “Ahn Cheol-soo phenomenon” as the reason for the drop in undecided voters.

Many of the voters supporting the professor-turned-politician are centrists and non-partisan voters who could have originally been undecided.

“If you compare the poll results for a two-way race between Park versus Ahn and Park versus Moon, you’re able to see that Ahn has secured support from centrists and non-partisan voters,” said Yoon Jong-bin, a professor at Myongji University. “Undecided voters, who in the past gave up voting or cast votes to a party-affiliated candidate, have turned their support toward Ahn.”

When Ahn declared his bid for presidency last month, he criticized existing political groups, which experts say was a move that showed he knew where his support came from.

Meanwhile, with a lower-than-usual percentage of undecided voters in the upcoming election, concerns are being raised that three major candidates and their respective election camps will conduct excessively negative campaigns to win the race.

“It will be the most realistic campaign formula for candidates to destroy the fantasy voters have of their rivals and make them give up their voting, which will lower the approval rating,” said Yoon Hee-woong, a senior fellow at the Korea Society Opinion Institute. “This will be the most ideal move especially at a time when there are no voters to win over.

“Presidential candidates are announcing policies [as part of election campaign efforts] but it will be impossible for them to avoid ‘negative campaign.’?”