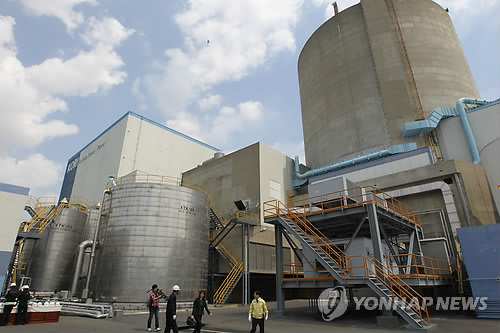 Two nuclear reactors at two separate atomic power plants in South Korea stopped operation Tuesday due to technical problems, but there was no risk of radiation leak at either sites, the plants' operator said.

The Shingori 1 Reactor in Busan, 450 kilometers southeast of Seoul, was shut down at 8:19 a.m. after a warning signal indicated a malfunction in the control rod, which is used to control the rate of fission of nuclear materials, according to the Korea Hydro & Nuclear Power Co. (KHNP).
It is the first time that reactor has been shut down due to a malfunction since the 1,000 megawatt reactor began commercial operation on Feb. 28, 2011.

The incident was soon followed by the shutdown of a second reactor at Younggwang Nuclear Power Plant, located 350 kilometers southwest of Seoul in South Jeolla Province.

The Younggwang 5 Reactor had to be turned off at 10:45 a.m. after its steam generator showed a low water level, the KHNP said in a released statement.

"Both power plants remain stable and pose no threat of radiation leakage," it said, adding separate investigations are underway to determine the exact cause of the malfunctions.

However, the incidents are apparently adding to already heightened public fears here over the safety of nuclear power plants following the worst radiation leak in the history of nearby Japan in March 2011.

"Problems in the control rod that is a key safety feature to control nuclear fission could lead to major accidents when coupled with other natural disasters or malfunctions," the Korean Federation of Environment Movement, a coalition of civic environmental groups, said in a press release.

"The KHNP and the Nuclear Safety and Security Commission must identify the fundamental problem and resolve the people's fundamental concerns," the release read.

South Korea currently operates 23 nuclear reactors, supplying about 30 percent of its total electricity consumption. It plans to build an additional 16 reactors by 2030.