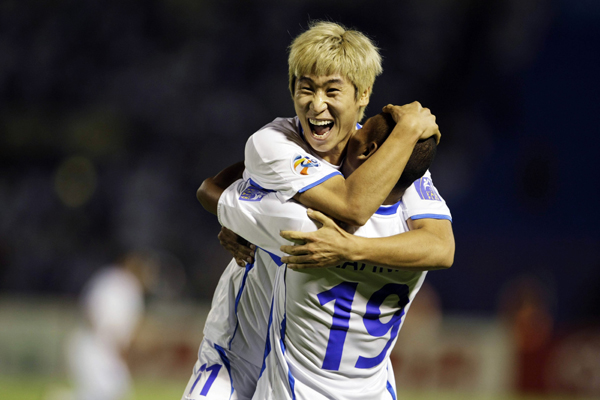 Lee Keun-ho, left, of the Ulsan Tigers, celebrates with teammate Rafinha after scoring a goal against Al Hilal of Saudi Arabia during the second leg of their AFC Champions League quarterfinal football match at the Prince Faisal bin Fahd Stadium in Riyadh early yesterday Korea Standard Time. Ulsan won 4-0 to advance to the semifinals. [REUTERS/YONHAP]


The Ulsan Tigers advanced to the semifinals of the Asian Football Confederation Champions League after routing Al Hilal of Saudi Arabia 4-0 in the second leg of the quarterfinals in Saudi Arabia early yesterday morning Korea Standard Time.

Ulsan will play Uzbekistan’s Bunyodkor, who defeated Australia’s Adelaide United 5-4 on aggregate after a 3-2 win in the second-leg match, also early yesterday KST.

The first leg of the semifinal between the two clubs will be in Uzbekistan on Oct. 24 with the second leg in Ulsan on Oct. 31.

Coach Kim Ho-gon told the media after the match that Al Hilal was not an easy opponent, but thorough preparations and execution worked well. He said he had expected the opponents would come out aggressive.

“Today’s match was very important as we went into the game with a narrow advantage so we wanted to secure our place in the semifinals in this match,” he said.

“We won the game because we expected that Al Hilal would play very aggressively, so we were prepared and we focused on pressing up on the Al Hilal players in addition to our counter-attacking.”

Kim said he wanted to compliment the players for following through with his orders.

Ulsan, the only Korean club left in the prestigious tournament, seeks their maiden Asian crown.

The two-time K-League champions advanced to the AFC Champions League semifinals in 2006, where they were knocked out by the compatriot Jeonbuk Motors. The Motors won the 2006 Asian title.

At the match held at the Prince Faisal bin Fahd Stadium in Riyadh, Rafinha scored the opener in the 23rd minute with a strong left-footed shot from a difficult angle that found the back of the net.

He added three minutes later on a pass from Kim Seung-yong that bounced between the legs of the goalkeeper Abdullah Mohammed Alsdairy.

Striker Kim Shin-wook found his own chance with a cross from Maranhao and headed it home in the 53rd. Midfielder Lee secured the win on a free kick in the 65th.

Rafinha joined Ulsan from Gamba Osaka in Japan in July and has scored five goals in 13 matches in the K-League since.

Al Hilal coach Antoine Kombouare conceded that the play of his side deserved a loss.

“We started the game very well but after Ulsan scored their opening goal, things became hard as it affected us very negatively,” the French coach said. “The match was very hard for us and we are really sad about this result and for failing to advance to the knockout stage.

“Ulsan were better than us today and they deserved to win. Our opponents were strong and they didn’t give us a chance to make a good comeback after they scored each goal.”

The other semifinal will be an all Saudi duel.

Al Ahli of Saudi Arabia beat Iranian defending champions Foolad Sepahan 4-1 on aggregate to reach the semifinal while another Saudi club Al Ittihad got past China’s Guangzhou Evergrande 4-2 on aggregate in the quarterfinals.