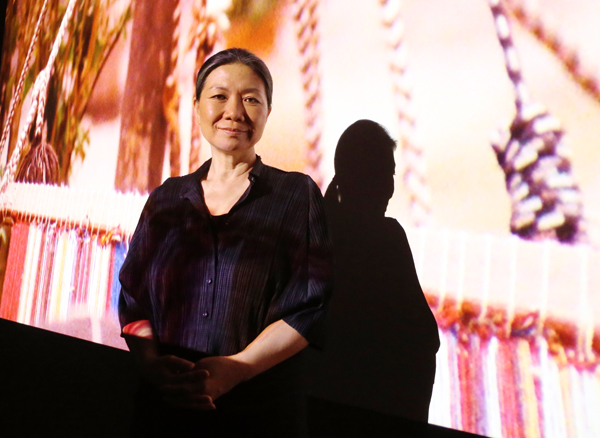 Kimsooja with the screen showing her work “Thread Routes - Chapter 1” (2010) at Kukje Gallery in central Seoul. By Choi Jeong-dong


A video shows a gray-haired woman sitting with her back to the camera. After some minutes of silence, someone calls her name. She looks back with a subtle smile, apparently with mixed feelings. At that moment, her deeply wrinkled face, exposed by soft light in a darkened room is as beautiful as that of the “Girl with a Pearl Earring,” a portrait by the 17th-century Dutch master Johannes Vermeer.

The 31-minute video “Album: Hudson Guild,” by renowned artist Kimsooja, shows a group of senior citizens in New York City one by one in that way. Their expressions are delicate and different when they look back as the artist calls their names; one looks back fondly and peacefully, another with anxiety.

The video, full of emotion and humanity despite its calmness, is being screened at the 9th Gwangju Biennale, which runs through Nov. 11 in the southwestern city.

“The sitters’ expressions reflect their personalities and their own histories, which are rich and complex,” Kimsooja said in an interview with the Korea JoongAng Daily at Kukje Gallery late last month. She added that most of people at the Hudson Guild Senior Center in Chelsea, New York, are immigrants from Central and South America, Europe and Asia in their 60s to 80s.

Kimsooja is also holding a solo show at Kukje, in the art zone east of Gyeongbok Palace in central Seoul, through Wednesday. The exhibit includes two of her latest video works: chapters 1 and 2 of “Thread Routes.” They weave together cultures in various regions using images of nature and architecture.

Kimsooja is one of the best-known Korean artists on the international scene. The 55-year-old artist won fame with the 1997 performance and video “2,727 kilometers Bottari Truck.” For the work, she traveled throughout Korea for 11 days on a truck loaded with bottari, referring to the Korean traditional cloth bundle used to carry belongings.

Another representative work of the artist is “A Needle Woman,” a series of performance and videos made from 1999 to 2001. The videos show the artist from the back standing in the middle of a main street in various cities with crowds of people continuously passing her.

All these works reflect Kimsooja’s consistent interest in human conditions, migrations and encounters with different cultures. The Korea JoongAng Daily talked with her about her works now on display and her philosophy.


Q. Would you explain more about “Album: Hudson Guild”?

A. It is related to my memories of my deceased father. In his latter days, he suffered short-term memory loss. So even when my father and I were chatting, he would suddenly forget where I sat or stood and would look for me. I cannot forget the expression on my father’s face at those moments. Later I was commissioned by New York’s More Art to make a work about residents in Chelsea. I decided to make a work about senior citizens in Hudson Guild from among several communities in the area, recalling my deceased father.

Why did you have participants sit with their backs to the camera and then turn their heads when you called their names?

I wanted to capture the moments when people transfer from inside their own worlds to relations with others outside. People tend to reveal their true personalities in such moments.

Accordingly, I had participants sit with their backs to the camera so they would not be conscious of the camera and easily embark on their own psychological journeys. When each participant got absorbed in drifting thoughts and when I felt I was now in step with him or her, I called the name.

I think the participants were turning over the pages of their lives when they were lost in thought. The expressions on their faces, when they turn their heads, imply the flow of time in their lives. So this work is a group of their portraits in which their personal histories and memories are condensed.

In the last scene of the video, the participants are sitting together, facing the camera this time. At this moment, they looked like a giant constellation that consists of stars of each personal history.

And how long did it take to shoot each sitter’s scene?

The time differed with each participant, because it took longer for some to get lost in thought and shorter for others.


As for the chapters 1 and 2 of “Thread Route,” they are poetic but at the same time similar to documentary films, except for the lack of narration. What do you think?

It is difficult to talk about the borders between a work of art and a documentary film. I think I’d better talk about each work’s individual quality rather than its characteristic as a genre. Actually, I’m more interested in some well-made documentary films than artworks.

I focus on content rather than form. I wanted to show how a region’s weaving culture is related to the region’s indigenous history and the people’s lives by exploring the simple and repetitive acts of sewing and weaving. I wanted to show how the people’s aesthetics, inspired from nature, penetrate not only the region’s textiles and laces, but also architecture and other culture, by juxtaposing the related images. So I naturally came to select the form of documentary film. I think these works are visual anthropology documentary and visual poem at the same time.

You made “A Needle Woman.” And now is it the turn of “thread?”

Yes, they together make up a big picture of my oeuvre. A needle is a more abstract object and a thread is more figurative and narrative. But I also think a thread is more emotional, so thread is a mind and a needle is a body. Just as a thread penetrates a needle and expresses itself only via a needle, in other words, pulls together and connects pieces of fabric, mind penetrates the body and expresses itself through the body.


When you make video works about regions with different cultures, do you come close to people?

You know the work “Mumbai: A Laundry Field,” which consists of four screens each showing 10 minute videos depicting various scenes in Mumbai, India, such as the laundry, streets at dawn, slums and overcrowded commuter trains bursting with passengers getting a ride by hanging onto the doors.

I began the work when I had to research the world’s slums and I went there only because I heard that the Mumbai slum is one of the biggest.

At fist, I was somewhat afraid. But people there were much nicer than I expected and they were enjoying life in their ways. Children always followed me, and I learned from them that my name Sooja means a big needle used to make mattresses in India, so I am destined to be “A Needle Woman.”

So I made their everyday life as work of art.