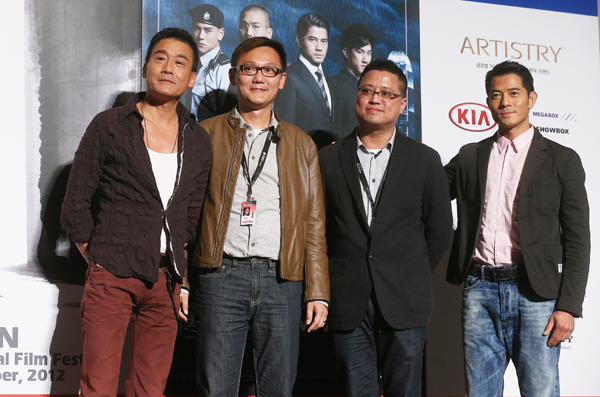 From left: Tony Leung Ka Fai, directors Sunny Luk and Longman Leung, and Aaron Kwok were in Busan for the screening of their film “Cold War.” [YONHAP]


BUSAN - The 17th Busan International Film Festival got under way yesterday with the world premiere of Hong Kong cop thriller “Cold War” and an appearance by the film’s co-directors and its two stars.

“I know it is the first time that a Hong Kong movie has been selected to open the Busan festival,” said co-director Longman Leung. “It’s really a great honor.”

Also in town for the opening of the 10-day festival were co-director Sunny Luk and stars Aaron Kwok and Tony Leung Ka Fai.

“I didn’t expect that ‘Cold War’ would be screened and chosen as the opening film when I started work on the movie,” said co-director Luk. “I feel really great to be invited here.”

Asked about the emotionally intense scene where the two deputy chiefs are engaged in a fierce argument, Kwok said, “The scene was challenging, so we had to go over it again and again.”

“After completing the part where I was satisfied 99 percent, the director suggested we shoot it one more time,” said Kwok.

“Then we all were 100 percent fully satisfied at the end.”

The movie distinguished itself from others in the genre by examining the power struggles and inner workings of Hong Kong’s police department, rather than presenting a series of spectacular action scenes.

“I wanted to make a new form of cop thriller by looking into Hong Kong’s police system as a whole and precisely depicting the internal conflict in the force,” said Leung.

“With its realistic approach, this film opened a new chapter in Asia’s movie industry,” Lee said when he announced the lineup for the festival last month.

Asked about the possibility of a follow-up film, Leung said, “I didn’t think about any sequel going forward. We managed to make one movie after five years of work, so I will leave the issue for later.”

“Cold War” is among more than 300 titles from 75 countries scheduled to be screened in Busan during Asia’s largest film festival. The movie will debut in China and Hong Kong on Oct. 18.