The faces of politics

The faces of politics 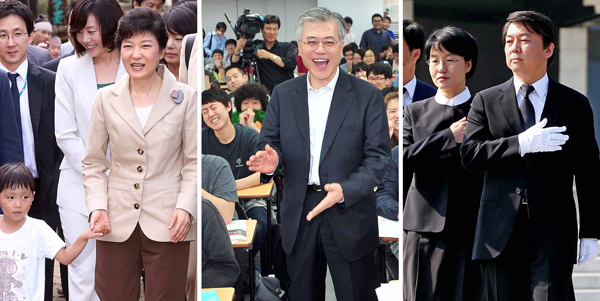 “Sometimes heaven sends a strange message,” complained a politician when the election result seemed to be completely different from the public sentiment he had predicted.

We often say it takes divine providence to be elected president. Even the most popular politician cannot become president if he does not win the heart of heaven. Many Koreans also believe that the president is selected by heaven.

In politics, the matter of divine providence is a political and philosophical proposition. Plato said, “God is the measure of all things,” as a counter argument to “Man is the measure of all things.” It may have been a natural conclusion in ancient Greece when people relied on oracles. However, realistically, there is no way of knowing who was chosen by God. Therefore, people always have arguments and debates over the interpretation of oracles. In every election season, fortune-tellers are highlighted in Korean politics.

Recently, a fortune-teller created controversy with his analysis of the three main presidential candidates, Park Geun-hye, Moon Jae-in and Ahn Cheol-soo. He said that none of the three candidates seem to be born with divine providence to become president.

However, he added that not having the destiny does not mean they cannot become president. But if such a person becomes president, the country may be faced with difficulties, he said.

When people get together, one of the most frequently discussed subjects is the physical characteristics of the candidates. People get in heated debates over who has the facial features reflecting divine providence. In fact, the presidential election may be all about the face because the faces of the candidates are the faces of the Republic of Korea.

However, it concerns me that the face of today’s Korea is different from that of the past. The face of a leader in the past required the passion and will for power and authority. Just as Machiavelli said, a leader should be as dignified as a lion and clever as a fox. The faces of the leaders reflect a sense of calling as they chase a grand cause to realize divine providence.

However, the faces of the presidential candidates better belong to the celebrities chasing popularity. Park Geun-hye is graceful and elegant, and Moon Jae-in is intelligent and composed. Ahn Cheol-soo’s face is comfortable and gentle. They are not much different from the actors who are competing to make their own image. Perhaps, the media and social networks have contributed to the trend. But they only propose fancy rhetoric without offering any inspiring vision or blueprint.

If it is the face of Korea that reflects the time, it may be problematic. German philosopher Max Weber was concerned about homogenization and the shrinking of politics. Weber thought that the politicians who challenge the presidential power based on popularity attained through other careers or have a momentary sense of calling did not consider politics as a vocation.

Park Geun-hye remains in the shadow of her father, Moon Jae-in was practically pushed into the presidential race and Ahn Cheol-soo had been reluctant to join the race. So it is hard to find a candidate who truly believes it is a calling. They seem to be motivated by the public sentiment nostalgic for Park Chung Hee or Roh Moo-hyun or distrustful of party politics. It is only natural that they do not project a sense of vocation.

However, the will of heaven may take on a different meaning in real politics depending on your interpretation. In democratic politics, winning the hearts of the people is the shortcut to winning divine will. The presidential runners struggled to charm the voters with friendly and down-to-earth images for the holiday season.

But when you lack a sense of calling and only advocate rhetoric, it is not easy to be chosen by divine providence. The competition of image is likely to become a veiled race of hypocrisy. Even if you win the public sentiment, there is a possibility that it will appear as a movement of prejudice and emotion flying in tandem. Naturally, the nation may be faced with difficulties.

Then, heaven will feel insulted and say that the will of the people is misguided. The victory of the public sentiment may lead to a denial of party and parliamentary politics. The fundamental framework of our democracy will be tested.


* The author is a political science professor of Seoul National University.