Psy to let it all hang out tonight at City Hall

Psy to let it all hang out tonight at City Hall 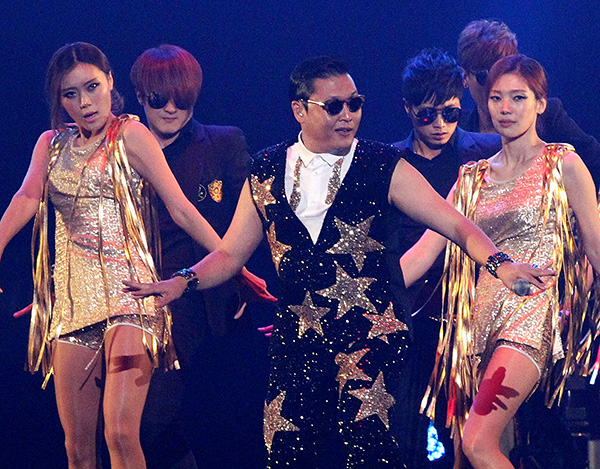 Psy dances up a storm at his “Let’s Play with Psy” concert which took place on Tuesday at Jamsil Indoor Stadium in southern Seoul. By Lim Hyun-dong


Regardless of whether or not he takes the No. 1 spot on Billboard, Psy has decided to go through with a promise to give a free performance of “Gangnam Style” in central Seoul today.

The Seoul City Government expects up to 50,000 fans to make it downtown for the spectacle and promised to offer its full support.

At his concert in Jamsil, southern Seoul, on Tuesday, Psy reiterated the promise he made last week at a press conference upon returning to Seoul, where he announced that if he reached Billboard No. 1 he would perform bare-chested at City Hall Plaza.

“The results come out on Thursday [U.S. time], but regardless I’m going to perform outside of City Hall,” Psy told the enthused audience.

The comical singer said that the free event was a gesture of gratitude toward his Korean fans who have stuck by him through thick and thin.

Meanwhile, the mayor and the Seoul government said they would do all they could to make tonight’s performance as smooth as possible.

For one, the city government announced that it will prohibit cars from entering the central district, limiting access around the Press Center, Deoksu Palace, Sejongno, City Hall and Euljiro.

“We expect a turnout of around 40,000 to 50,000,” said a spokesperson for the government, who added that the event will run from 10 p.m., and will hopefully have the crowd engaging in the horse dance with the K-pop icon.

Mayor Park Won-soon went on Twitter yesterday to publicize the event and added that he too was looking forward to the spectacle.

“Seoul City is behind the act all the way. Let’s show the world how to do it ‘Seoul Style.’?” He also added that personally he’d like to see Psy show some flesh.

Psy’s treat for the fans at home comes as he claims another victory abroad. The catchy, irreverent song became the No. 1 single on the U.K. charts at the end of last month. The song secured the top spot on the Official U.K. Singles Top 40 chart after six weeks.

After the triumph in Europe, the song’s performance on the U.S. chart is eagerly anticipated.