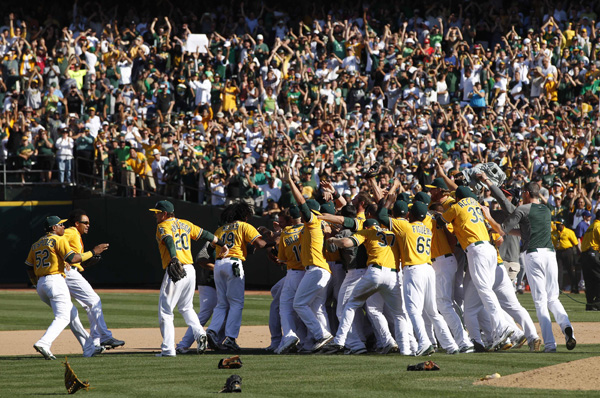 The Oakland Athletics won the division title with another improbable rally in a season full of them, coming back from four runs down and a 13-game division deficit to stun the two-time defending league champion Texas Rangers 12-5 on Wednesday.

“We knew this is a beast of a team we would have to beat, and to be able to beat them three games in a row and win the division on top of it, really it’s a magical-type thing,’’ manager Bob Melvin said.

Josh Hamilton dropped a fly ball in center field for a two-run error that put the A’s (94-68) ahead 7-5 in a six-run fourth inning. The A’s only added to Texas’ troubles the rest of the way.

While Hamilton’s Rangers (93-69) are headed to the new one-game, wild-card playoff at home against Baltimore on Friday, the A’s get two days off before opening the division series at Detroit on Saturday in their first postseason appearance since 2006.

“You can have all the experience as you want but when you run into a team that’s hot, experience has nothing to do with it,’’ Texas manager Ron Washington said.

The A’s needed a sweep and they delivered to win their first division crown in six years and 15th in all. They overcame a five-game deficit in the final nine days and took sole possession of the West’s top spot for the first time this year.

“It shows how important Game 162 is,’’ Oakland’s Jonny Gomes said. “I don’t think it took 162 games to check the character of this ball club.’’

Grant Balfour retired Michael Young on a fly to center for the final out, then raised his arms in the air as the A’s streamed out of the dugout and began bouncing up and down in the infield.

“2012 AL WEST CHAMPIONS” flashed on the scoreboard two days after the A’s clinched a playoff spot Monday and held a wild dance party in the clubhouse.

“I’m glad there’s not one tomorrow or Friday,’’ owner Lew Wolff said. “I can relax and go home. I’m running out of underwear.’’

Miguel Cabrera, one of baseball’s reluctant superstars, finally achieved history 45 years in the making Wednesday night after his team the Detroit Tigers, the AL Central champs, managed to beat the Kansas City Royals 1-0.

“It’s an unbelievable feeling,’’ he said. “I can’t describe the feeling right now.’’

Cabrera’s achievement wasn’t assured until the Yankees pinch-hit for Curtis Granderson in their 14-2 rout of the Boston Red Sox. Granderson had homered twice to reach 43 for the year, tied with the Rangers’ Josh Hamilton and one shy of Cabrera.

Cabrera went 0 for 2 against the Royals before leaving in the fourth inning to a standing ovation. He finished the regular season hitting four points higher than Angels rookie Mike Trout, his toughest competition for AL MVP.