ADT guards its future with tech

ADT guards its future with tech 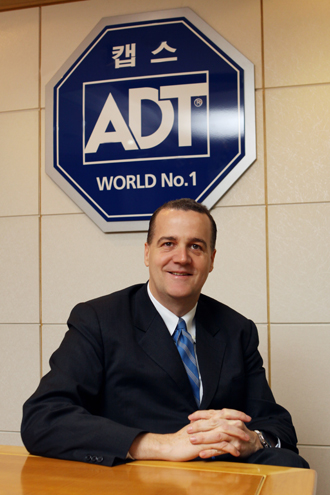 Bradley Buckwalter, CEO of ADT Caps, the Korean affiliate of the world’s largest security firm ADT, says the future of security companies will depend on how they use smartphones to guard homes and offices.

In an interview with the Korea JoongAng Daily on Sept. 28, Buckwalter said only companies that wisely link their security services to the mobile devices of the day will gain an upper hand in the industry.

“The whole security business is now trying to link with life style, which is being enabled by the dramatic technology available from smartphones,” Buckwalter said. “I think up until 3G network, wired products were little bit more efficient and quicker than wireless products.

“With the new 4G networks, wireless is definitely quicker, most cost effective and easier to use in all aspects so the future security networks will go wireless very quickly.”

ADT Caps had 412.2 billion won ($370.1 million) in sales last year and it’s the No. 2 player in Korea after market leader S1, a security affiliate of the Samsung Group.

In July, ADT Caps established a Songdo R&D center that focuses on developing next generation technology, including facial recognition for the Korean market and other markets such as China and southeast Asia.

The Songdo center is the third largest of its kind after centers in Canada and Italy.

Prior to joining ADT Caps in 2010, Buckwalter served as CEO of Otis Elevator Korea since 2006. 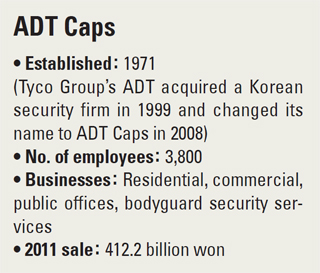 A. Korea is an amazing security market. It’s a small country, but the standard of safety in Korea is higher than any other country in the world. By comparing all ADT businesses, there’s only one other country other than Korea - South Africa - that has its own patrol guard force. I have 17,000 patrol guards posted around the country.

When one of our alarms goes off, they respond to the event to protect our customers and their assets. In the U.S., when an alarm goes off, it goes to the police and the police usually take an hour and half to show up.

Our patrol guards show up on an average of 10 minutes and 15 minutes at the longest. The response time required by Korean customers is a much higher level than anywhere in the world.

Wherever there’s a crisis there’s an opportunity. Previously our customers have been using wired networks, but we’re investing heavily in wireless capabilities in Korea. It’s faster, accurate and efficient.

It saves customers installation costs. We combined our two monitoring centers into one. My approach during the economic crisis is to utilize technology and IT networks and the Korean infrastructure.

By doing all of this, I was able to improve productivity and customer service.

What are some special features of the new smart security solution, ADT Calm, that will be launched in November?

It took us a year and a half to develop the system. With your Galaxy phone or iPhone, you can control almost all functions in your home. You can turn lights on and off, control the temperature, you can remotely monitor video. If you left the gas on, it will detect gas and it will be taken care of. If the water’s on in your house, you can stop it from flooding. These services run wirelessly and it costs between 59,000 won and 86,000 won per month. If you’re one person and have multiple sites - office, factory, home and vacation home - pretty much all of them will be taken care of from one icon on your smartphone. [It works] anywhere in the world that has the Internet. I was talking to a customer the day when there was typhoon and he was very worried about his vacation home. He had to make a special three-hour trip to the vacation home to see how it was. If he had that system he could have immediately checked out the house.

The whole security business is now trying to link with a life style, which is being enabled by the dramatic technology available from smartphones.


How do ADT Caps’ latest products differ from those of rival S1?

S1 has a product called Homes. They give you a light and you have to use their light. You can control that light from your smartphone. However, with our product, you control your existing light.

So you can choose whatever design of light you want and control it. Not only that, our Calm product has many more features than Homes. They have video and gas control, but temperature control is not available.

What is the future of the security industry?

That will be a convergence of life style products. I think up until 3G network, wired products were little bit more efficient and quicker than wireless products.

With the new 4G networks, wireless is definitely quicker, most cost effective and easier to use in all aspects so the future security networks will go wireless very quickly.

ADT is the No. 1 security firm in the world, but it’s the No. 2 player in Korea. How will you grow ADT Caps’ market share to beat S1?

S1 is a very formidable company and they have been in business for a longer time than ADT. It has been in operation for a little over 10 years. In that period, the market share of ADT has been going up and the growth rate of ADT is now equal to or higher than S1. S1 has a distinctive advantage, which is they have almost 100 percent of a captive market called Samsung. But when you exclude the Samsung factor, I think we’re quite comparable. The only way to beat them is to offer more competitive products and services customers prefer. All of the activity is developing new products like Calm, investing in my customer management, making sure monitoring centers have highly training employees and equipping them with the best technologies available. They’re a tough competitor for sure but they consider us as a hard fighter as well.

Are you looking into M&A deals to beat your rival?

To succeed in the security business, you need a high density of customers and you have to expand your security network to meet customer demands. Small companies try to compete with us and it costs a lot of investment and they don’t have enough customers and they get financially distressed.

If the company has a culture that matches ours and it makes good sense in an area where we can expand our customer base, we’d consider small acquisitions.