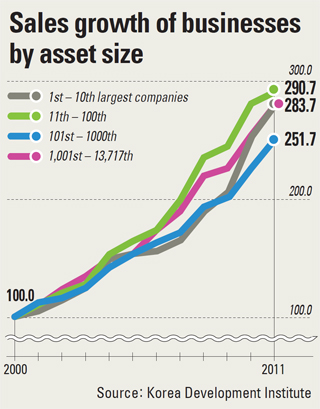 At a time when protecting small businesses from conglomerates has become a key slogan for ruling and opposition parties, a government report argued yesterday that there is little evidence proving that chaebol hinder the growth of small companies.

A report by the Korea Development Institute (KDI) yesterday suggests there has been no big growth difference in annual sales or operating profit between the two over the last decade.

The KDI divided 13,717 businesses into four groups by asset size, with the chaebol taking up parts of the first two.

KDI researcher Lee Jae-hyung pointed out that the domestic manufacturing industry has in fact seen a dramatic slowdown since 1995.

“Regardless of size, businesses face slow growth, which puts a drag on their performances,” Lee said. “Smaller, more vulnerable companies may look like they suffered more, when really their problems just seemed magnified because of their size.”

The annual growth rate of the manufacturing sector declined from 18.1 percent during the late 1980s to 9.1 percent in the period running from 2005 to 2009, Statistics Korea said.

President Lee Myung-bak has pursued mutual growth in an attempt to balance the interests of large and small businesses ever since he pledged to build a “fair society” in 2010, and the government is now directly intervening in companies’ trade practices.

Meanwhile, conglomerates have faced growing criticism over the last two years for expanding into the business areas of small companies, especially in the retail sector where many of the latter are concentrated.

On Wednesday, the Fair Trade Commission (FTC) set a new precedent by imposing a 4 billion won ($3.6 million) fine on Shinsegae Group and one of its subsidiary operations E-Mart for unfairly helping three of their bakeries and a pizza parlor by charging favorably low commission fees. As a result, the commission found, the smaller units were able to expand their sales and profits at the expense of small rivals.

Shinsegae came under particularly hostile fire after the FTC found that its vice chairman, Chung Yong-jin, personally green-lit the move.

However, President Lee maintains that government regulation of this kind will not have much effect in redressing such problems as natural top-down relations exist between a conglomerate and its subsidiaries.

“Conglomerates are taking flak for engaging in internal transactions with their own units, but [this is their prerogative],” Lee said. “It’s not right to see such practices as a side effect of unfair relations between large and small businesses.”