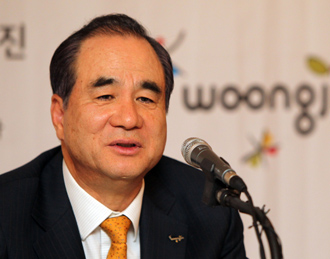 Woongjin Group Chairman Yoon Seok-keum yesterday announced he would resign from his co-CEO post in response to mounting criticism that he is trying to manipulate legal loopholes in corporate restructuring regulations to maintain managerial control of the group’s two affiliates.

Yoon was peppered with criticism for greediness after it was disclosed that he listed himself as co-CEO of Woongjin Holdings immediately before Woongjing Holdings and its construction arm Kukdong Engineering & Construction filed for a court receivership program on Sept. 27.

The law regarding bankruptcy and restructuring says a court should appoint the CEO of a debt-ridden company as a court-appointed manager.

Yoon was quoted yesterday by the group as saying he decided to leave the co-CEO post of Woongjin Holdings to “dissolve misunderstanding surrounding his recent movement.”

With Yoon’s departure, Shin Gwang-soo is the sole CEO of Woongjin Holdings, the company said yesterday.

Yoon remains the largest shareholder in the company. He controls 73.92 percent of its shares.

Analysts said Yoon decided to ditch the co-CEO position shortly after creditors said they will request that the presiding judge at the Seoul Central District Court today exclude Yoon as a court-appointed manager for the corporate restructuring plan.

“We will continue demanding that the court exclude Woongjin-related executives from being appointed as court-appointed managers,” said a creditor. “Yoon’s resignation will be meaningless if any aide of his is appointed as manager. He will be controlled by Yoon.”

The creditors have said they will consider requesting that Woongjin Coway, a subsidiary that makes water purifiers, be sold off immediately to repay some of the group’s debts.

When Yoon listed himself as co-CEO of Woongjin Holdings nine days ago, it met strong opposition from creditors, including Woori Bank and Shinhan Bank, which saw it as a manipulation of loopholes in the legal system.

In a separate but related matter, Financial Services Commission Chairman Kim Seok-dong said yesterday morning that the financial regulator will look into revising necessary laws in conjunction with the Ministry of Justice to close the legal loopholes of the current corporate restructuring regulations after Yoon’s behavior made headlines.

The number of companies applying for court receiverships skyrocketed to 712 last year, up from 76 in 2006, when the Integrated Insolvency Act was first enacted.

Among the 142 companies with over 20 billion won ($17.9 million) in debt that entered court receivership since 2006, 120 of them appointed their CEOs as court-appointed receiver, according to the Financial Supervisory Service.

“A comprehensive improvement of the Integrated Insolvency Act is necessary to use it as a restraint apparatus to prevent morale hazards of management of a company,” Kim said.