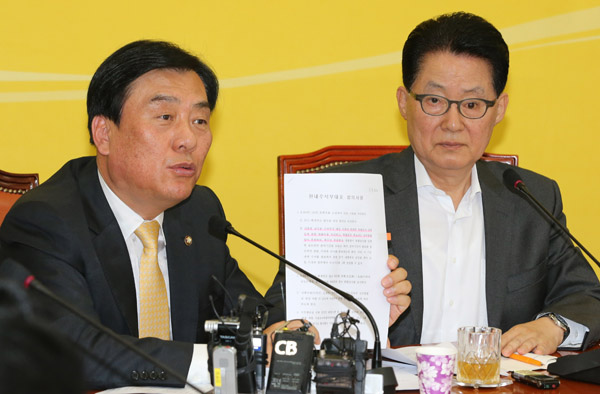 
Tensions are escalating between the ruling and opposition parties over the probe into the president’s aborted retirement home plan.

The opposition Democratic United Party recommended two lawyers on Tuesday, Kim Hyeong-tae and Lee Gwang-beom, as candidates to lead an investigation into President Lee Myung-bak’s purchase a plot of land in posh southern Seoul to build a retirement home. He scrapped the plan after controversy arose over the purchase being made in his son’s name along with questions about whether the government’s contribution to the purchase was excessive. 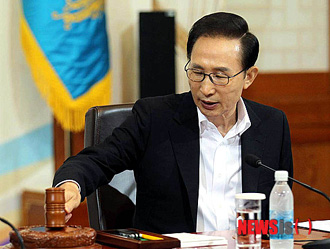 A large portion of the 5.4 billion won ($4.8 million) purchase price came from state funds through the Presidential Security Service from the Blue House.

The ruling Saenuri Party opposed the DUP’s recommendation, saying the two nominees were too left-leaning to conduct a neutral probe.

Under the special investigation law the National Assembly passed Sept. 3 to investigate the purchase, the president will choose one of the two lawyers recommended by the opposition DUP, which is supposed to consult with the ruling party.

If Lee doesn’t choose a special prosecutor today, it will be a violation of the law and possibly an impeachable offense.

“The DUP made a unilateral recommendation without getting any agreement from us,” Lee Hahn-koo, the floor leader of the ruling party, said at the National Assembly yesterday. “If the DUP indeed wants the truth, not just to attack the president, they should once again recommend a fair-minded, neutral candidate after a discussion with the Saenuri Party.”

Representative Lee said the DUP was using the probe to draw public attention to the president’s alleged corruption only 75 days before the December presidential election.

“The DUP should issue an apology for degrading the special probe as ‘a probe for winning an election,’?” Lee added.

The Blue House also rejected the recommendation of the two lawyers Wednesday.

“[The Blue House] expresses concerns about the current confrontation between the ruling party and opposition surrounding the DUP’s unilateral recommendation for the special prosecutor without negotiating with the ruling party,” Choe Guem-nak, senior presidential secretary for public affairs, told reporters Wednesday. “So we decided to call for a renegotiation between the parties.”

Choe added that the rejection was not due to the candidates themselves.

Lee Dal-gon, senior presidential secretary for political affairs, tendered his resignation Wednesday, taking responsibility for the failure of the ruling and opposition party’s agreement on the recommendation. The president hasn’t accepted the resignation yet.

The two recommended lawyers are known to be liberals. The 55-year-old Kim is a member of Lawyers for a Democratic Society, a private organization of liberal lawyers launched during the democratization movement of the 1980s. Many of its members are former human rights and labor activists.

The 53-year-old Lee is a former senior judge at the Seoul Central District Court and the Seoul High Court. He was also a member of the Society for Research on Our Law, which was founded in 1989 by judges protesting the government-controlled judiciary.

DUP floor leader Park Jie-won refuted the idea that the recommendations were unilateral.

“Before the 19th National Assembly began, the ruling party agreed to conduct a special investigation into the case and consented to our own recommendation of the prosecutor candidates,” Park said in a radio interview with MBC yesterday.

“Even when we were in the process of making the recommendation, we had a couple of discussions with the ruling party.”

Park warned that the due date for President Lee to choose the prosecutor is today.

“If the president doesn’t appoint the special prosecutor, it will become a big burden to the ruling party’s presidential candidate Park Geun-hye,” Park added.

The Blue House’s refusal angered other members of the main opposition party.

“The Blue House wants us to recommend a special prosecutor it likes,” said Park Young-sun, a DUP lawmaker and head of the National Assembly’s Legislation and Judiciary Committee.

The presidential candidates of the Saenuri Party and the DUP, Park Geun-hye and Moon Jae-in, didn’t comment on the issue.

But independent candidate Ahn Cheol-soo did.

Yoo Min-young, Ahn’s spokesman, told reporters yesterday at a briefing that Ahn thinks that the president “should obey the new law” and “choose one of the two recommended candidates within the deadline.”