After effects of gas leak in Gumi cause major worry

After effects of gas leak in Gumi cause major worry 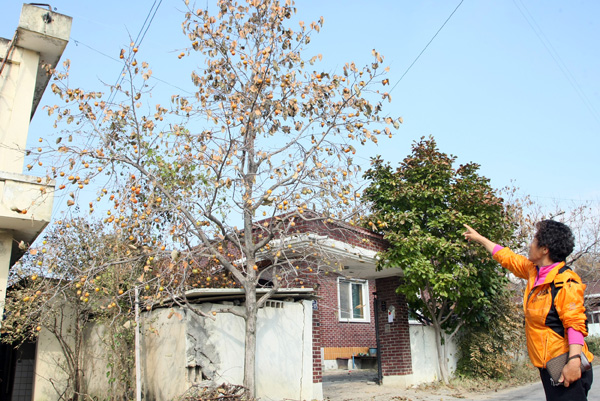 
Days after a deadly gas leak at a chemical factory at an industrial complex in North Gyeongsang, environmental groups raised concerns about possible contamination of nearby farms and water sources, while authorities tried to contain the environmental damage.

A leak from a tanker truck containing hydrofluoric acid at the Hube Global Plant in Gumi, North Gyeongsang, left five workers dead on Sept. 27. Following the incident, testing began of nearby streams, farms and the Nakdong River, one of the four-largest waterways of the country, by local authorities and environmental groups amid growing worries of contamination.

The leak at the Gumi National Industrial Complex, where a cluster of companies produce electronic products such as televisions, occurred when employees were transferring hydrofluoric acid from a 20-ton trunk with a hose within the factory. Exposure to hydrofluoric acid, a transparent and highly corrosive gas with a pungent odor, can cause irritation and even permanent damage to the eyes and lungs in some extreme cases. 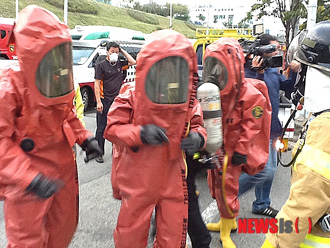 Authorities carried out emergency measures such as handing out face masks to residents in the area and took water samples from the Nakdong River, where Daegu gets its drinking water, near the leak site on Monday to test for possible contamination.

No immediate sign of severe contamination at the river was announced by the local government after an initial test, but more test results will be available later this week.

Environmental groups also warned that it is premature to conclude that the negative effects of the leak are completely contained. According to the results of the contamination assessment released yesterday, none of the samples showed signs of contamination.

“All the fluoride levels from water samples taken from the four different sites in the Nakdong River and streams near the site of the leak are found to be below the standard fluoride amount for tap water, which is 1.5 milligrams (5.29 ounces) per liter,” said Sohn Dong-hoon, director of the environment management team of the Daegu Regional Environmental Office.

Fluoride levels indicate how safe water is for consumption.

“Streams [nearby the factory complex] and the Nakdong River are safe from the gas leak as authorities blocked possible water leakage into the streams and the river from the factory immediately after employing water hoses to contain the spreading gas,” Sohn said.

Environmental groups, however, pointed out the river will be exposed to the contamination when rain falls on the acid-affected-soil in the future.

“As hydrofluoric gas is lighter than air, it is very likely that the poisonous gas already reached land near the Nakdong River, which is only six kilometers (3.7 miles) away from the site of the leak,” said Jung Soo-gun, director at the Korean Federation for Environmental Movement. “We should wait and see after rain hits the region as leaked residue now in the soil can make its way into the river.”

The size of damaged farmland from the gas leak is reported to be 91.2 hectares (225.3 acres) as of Monday, a threefold increase from the first report of 27.5 hectares, which came in a day after the accident.

Reports of livestock animals displaying erratic behaviors have also reached the emergency center run by the Gumi City Government. The reported symptoms include not eating their food while drooling heavily.

The number of people who live nearby the industrial complex and have received treatment from exposure to the gas stands at 410 as of yesterday, according to the city office. Firemen and police officers who were at the site have also been treated for dizziness and nausea.