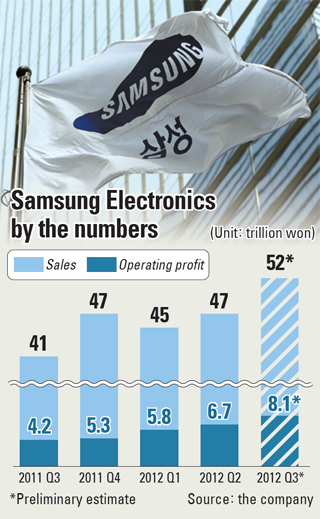 Samsung Electronics is likely to become the first Korean company to break the 8 trillion won mark in quarterly operating profit.

However, analysts are worried it may be a one-time event because of the dire outlook for the global economy.

The world’s No. 1 producer of mobile phones, memory chips and flat-screen panels said yesterday it posted an operating profit of 8.1 trillion won ($7.3 billion) in the third quarter, a 20-percent increase from a quarter earlier and 90 percent higher than a year earlier, the company said in an earnings guidance announcement.

Samsung will be the first Korean company to have a quarterly operating profit exceed 8 trillion won, unless the preliminary estimate misses the mark. The final quarterly earnings announcement will be made later this month.

For sales, Samsung said it posted 52 trillion won on a consolidated basis in Q3, up 9 percent from the previous quarter and 26 percent from a year earlier. It is also the first time a Korean enterprise surpassed 50 trillion won in sales.

But analysts said that despite the record earnings, Samsung’s stock price wouldn’t get much of a boost.

“There are worries that demand for expensive smartphones is likely to decelerate in coming months as consumers wouldn’t be willing to spend on such pricey electronic devices amid a prolonged economic slowdown,” said Lee Seung-woo, an analyst at IBK Securities. “Samsung could achieve the biggest profit in Q3 by dominating the global market, because luckily, there was no rival smartphone launched in that quarter.”

Lee said it’s possible that Samsung’s fourth quarter will be less profitable partly due to the launch of Apple’s iPhone 5 and general market conditions.

“The global smartphone market kind of reached its peak and is expected to see some decline in its growth rate from now on,” he said.

A Samsung official said a Ministry of Strategy and Finance forecast of roughly 2 percent economic growth next year makes Samsung worry that the Q3 earnings could remain the highest in the company’s history.

The Kospi hit the 2,000 mark yesterday morning thanks to Samsung’s earnings surprise.

Samsung didn’t release specifics for each division. Analysts assume that robust sales of smartphones were the biggest factor.

According to a report by IBK Securities, shipments of the Galaxy S3 model are estimated to reach 18 million units in Q3 alone, outnumbering the previous market prediction of 15 million. Samsung’s total smartphone shipments stand at 59 million, while its archrival Apple’s is estimated to be around 25 million.

“Although there were legal issues with Apple, we predict Samsung’s IT & Mobile division generated around 5 trillion won of the total operating profit, contributing the most,” said Song Jong-ho, an analyst at Daewoo Securities.