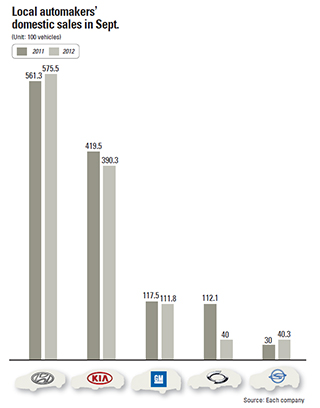 As domestic auto sales continued to sag last month, Korean automakers are offering special promotions and discounts to get customers in the showrooms this fall.

The combined overall sales of the nation’s five carmakers - Hyundai, Kia, GM Korea, Renault Samsung, and Ssangyong - was 673,426 vehicles last month, up only 0.3 percent from a year ago, according to data released by the companies Thursday.

However, the figure was buoyed by carmakers’ steady overseas sales, which edged up 1.86 percent to 557,615 vehicles. Their domestic sales in September slipped 6.65 percent on-year to 115,811 units, even though the figure was a 35.4 percent rebound from a really terrible August.

Hyundai Motor and Ssangyong were the only two companies that saw higher domestic sales compared to a year ago. 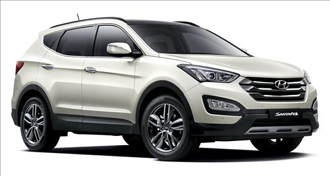 Hyundai, the nation’s No.1 automaker, sold 57,559 units last month domestically, a 2.5 percent on-year gain, thanks to steady sales of its popular models. Sonata, a midsize sedan, was sold 10,820 units last month, best among all domestic models, while Avante, a compact car, was No. 2 at 10,303 units.

Hyundai was hit with a labor strike in July and August.

“After the wage deal was concluded, production and supply almost normalized last month,” the carmaker said in a release. “Domestic sales picked up on the eased supply shortage.”

Ssangyong, the smallest automaker, turned out to be the biggest winner in domestic sales as its new models like Korando Sports and Korando C lured customers back into their showrooms. Its September sales jumped 34.5 percent on-year after selling 4,036 vehicles.

But Kia, the No. 2 automaker, saw a 7 percent on-year drop in its domestic sales after selling 39,030 units, while GM Korea’s sales fell 4.9 percent on-year after Korean drivers bought 11,181 units from the No. 3 player.

Renault Samsung, the No. 4 automaker in Korea, suffered a serious domestic sales slump. The Korean unit of French automaker Renault had the worst September sales among the carmakers after selling 4,005 units, a whopping 64.3 percent on-year drop in sales.

Automakers speculated that a government plan to boost slowing domestic consumption will push up domestic auto sales in the coming months. The government on Sept. 11 announced that it will temporarily cut 1.5 percent points on the consumption tax on automobiles.

“The cheaper price tag will stimulate consumer’s sentiment and we expect the demand will be bigger from next month,” Hyundai said in a release.

In addition to the government plan, local automakers have prepared special promotions and deals to boost sales this month.

Kia, Hyundai’s sister company, came up with a plan to subsidize automobile taxes and gas prices for those who buy new models. Customers who buy city car models like Morning and Ray will get a rebate of 160,000 won, which is the equivalent of two years of automobile taxes on city cars, while those who decided to buy Pride or Sportage R will get 200,000 won from the company as a subsidy for gas costs.

GM Korea is continuing its sales campaign “Love Safety, Love Chevrolet.” Drivers who wish to buy a Spark or Cruze can select payment programs that offers 36 months of installments without interest charges. If they don’t want an installment plan, customers can get an event data recorder, or black box, for free.

Renault Samsung will give a digital camera made by Samsung Electronics to anyone who buys a new car this month and is also offering a 1 million won discount for its SM5, a midsize car, if customers pay in cash.

Ssangyong seems to be the most aggressive among local carmakers this month. For those who buy Chairman H New Classic, a flagship luxury sedan, the company will give a 3 million won discount and will extend its warranty to five year or 100,000 kilometers.

Those who buy Rodius Euro, a minivan, in a lump sum will get leather seats for free and a GPS car navigator.