Ahn Hee-jae studies the education of a prince

Ahn Hee-jae studies the education of a prince 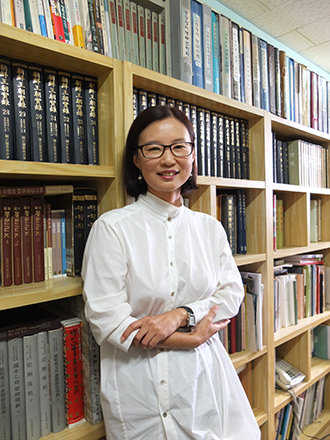 CEO Ahn Hee-jae, the host of the “The Prince’s Education” program at the Cultural Festival of King Jeongjo’s filial piety. [JoongAng Ilbo]

Ahn Hee-jae is the CEO of Korean Event, which promotes traditional Korean cultural events. Recently, Ahn was the host of “The Prince’s Education” at the Cultural Festival of King Jeongjo’s Filial Piety in Hwaseong, Gyeonggi.

Having graduated with a master’s degree in Korean traditional clothing from Dankook University and a PhD in ritual ceremonies from Kookmin University, Ahn has been running Korean Event since it started in 1994. In addition, she directs the entrance ritual of Sunggyungwan University and the changing of the guards at Daehan Gate of Deoksugung Palace.

Ahn emphasized that the key aspect of the prince’s education was “study” through reading sacred books, such as the philosophical text “Daehak,” or “Great Learnings,” the Joongyong literature text and the “Analects” of Confucius. At the age of 3, the prince was taught the “Thousand Character Classic” and various reading materials such as the “Dongmongsunseub”and “Gyeokmongyogul.”

“The prince really began to focus on his studies at the age of 7. He would wake up about 4:30 a.m. and start to study before taking his breakfast. His studying would continue throughout the night,” said Ahn.

It was also important for the prince to develop his concentration. “The prince practiced holding his breath, and this training helped to improve his archery. Every morning, the prince would submerge his head in the water of his washbasin, and the court lady or servant next to him would count the numbers. It is recorded that when the prince was 6, he held his breath and stayed in the water for 120 seconds,” said Ahn.

The prince found different ways to enhance his study methods as well. Before studying, he took a spoon of grain syrup, and while reading he pronounced aloud each word by pointing to it. “At dawn, the prince was fed thick rice gruel with ginseng and numerous proteins, including beans, to help his concentration,” said Ahn.

“These teaching methods were also incorporated into my program. The participants were students in grades five and six, and the program was eight hours a day for three days. The students learned martial arts, traditional music and palace etiquette through the teaching materials of the Sohak Confucian text and the Dongmongsunseub designed for beginner learners,” said Ahn.

“There was indeed a lot to study, but the thing is, there was no competition. The prince was not taught to win against others, because he didn’t need to. Instead, he learned how to read other people’s minds and to handle their problems with care. He was taught how to become a genuine leader and he found his way through reading,” said Ahn.