KakaoTalk looks to Cho for a new image

KakaoTalk looks to Cho for a new image 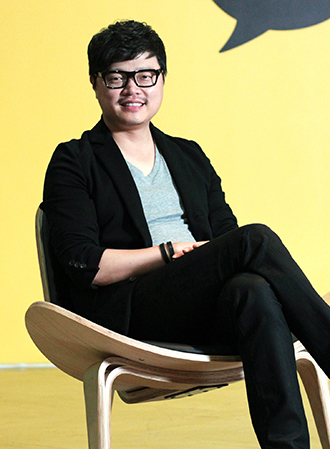 Cho is known as a makeover specialist, especially for IT companies. He served as the head of design center at NHN, the operator of the country’s largest portal site Naver.

The 37-year-old professional marketer has decided to alter the CI of Kakao in order to help the company change its current image as a messenger start-up into a bigger mobile company that provides various mobile services such as games, social networking and shopping.

Kakao’s new CI will basically look the same as the current design of the KakaoTalk application on the smartphone, but the speech bubble will be empty.

“Revamping the CI is part of the company’s global expansion strategy for next year,” Cho said. “We recently made a mobile game Anipang a big hit, but we are not satisfied with it. So, we are going global.”

The company aims to lead the global mobile market with three new businesses: launching its services in another language other than Korean and English; providing information on the December presidential election for users; and fulfilling its duty of corporate social responsibility.

Cho spent four years at NHN since 2008, in charge of the company’s corporate image. He is the creator of Naver’s current logo. Last year, he was promoted to executive director of NHN, grabbing media attention as the youngest executive director among the country’s 100 biggest companies.

However, Cho quit NHN in May, saying that he couldn’t concentrate on working as the company grew bigger and bigger. As the organization got bigger, the company became more like a conglomerate than a relatively free IT start-up, controlling employees work hours and lunch time, he said.

The foremost goal of Kakao, which provides a messenger service for 62 million people, is to offer the current service in another language. “The current global messenger market is dominated by What’s App in English, Weixin in Chinese, Kakao Talk in Korea and Line in Japanese,” Cho said. “Our success depends developing another language ahead of others.”

For those who are interested in politics, the company is preparing a service that sends summarized campaign pledges and schedules of the December election via the messenger.