Painter shows his love for animals

Painter shows his love for animals 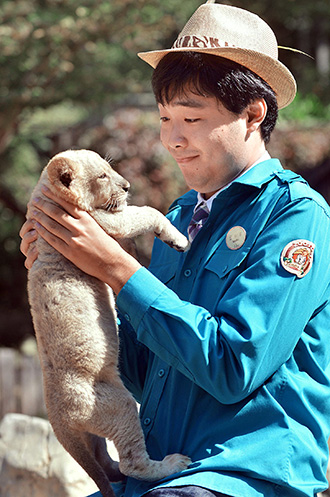 Shin Soo-sung, who was awarded the title of Honorary Zookeeper by the Everland Zoo, holds a baby lion Thursday. Despite his developmental disability, Shin visited the zoo every week since 2008 and painted animals. The Everland Zoo appointed him to the position in celebration of the World Animal Day. [NEWSIS]

Shin Soo-sung is an animalier, an artist specializing in realistic portraits of animals. He made his debut last July with an exhibition of drawings of animals that Shin observed at the zoo at Everland. His works at the exhibition in Seoul, which he hosted, were praised for their genuine perspective and the dynamic movement he portrayed.

In recognition of his work and care for the animals at the zoo, Everland awarded him with the title of Honorary Zookeeper Thursday as part of events to mark the World Animal Day the same day.

There is one thing, however, that sets Shin apart from other painters besides the fact that he specializes in closely tracking characteristics of animals. The recently debuted artist is in fact diagnosed with a development disability, and his learning abilities are equivalent to those of a 7-year-old.

“We just thought he was a bit slower than other kids in picking up the language as my husband and I are both Korean-Japanese,” said Lee Jeong-rye, Shin’s mother. “Though we tried many things to improve his condition, he was diagnosed with the mental condition when he was in middle school.”

“I have always adored animals since I was very young,” said the 27-year-old artist. Fascinated by different movements and characteristics of animals in the zoo, Shin always begged his parents to take him there when he was in kindergarten. Shin also went to the zoo by himself at least once a week during middle school years.

Shin’s frequent visits to the zoo led to a change in his behavior. The young boy, who wouldn’t make eye contact with parents and wouldn’t say a word for hours, loved spending hours in the zoo carefully observing each animal such as foxes, giraffes, parrots and pelicans. Upon heading home, Shin would grab a pen and draw what he remembered from his visit to the zoo.

“I would never get tired of watching animals no matter how long I did it,” said Shin.

“I had so many curiosities and questions about why each animal behaved in a certain, different way and tried to memorize their interesting behavior.” 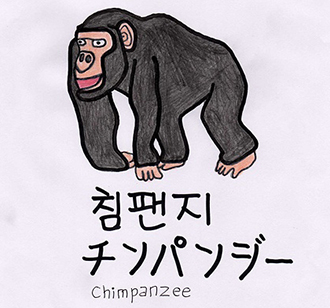 One of Shin’s drawings. Shin had his first exhibition with 70 pieces of art in July.

Since Shin graduated from Chungkang College of Cultural Industries in February 2008, which offers admission to the disabled, he went to the Everland Zoo once every two days. Guardians at the zoo soon recognized Shin’s in-depth observational skills despite his disability.

“Animals that Shin told us had not looked healthy enough all received medical treatments soon after,” said Suh Jeong-sik, a zookeeper.

Workers at the zoo started letting Shin come closer to the animals to better communicate with them, marking the beginning of the “Pets as Therapy” session, which uses pets as a means to help people emotionally in settings including hospitals, schools and mental institutions. Shin’s deep introspective personality became more outgoing thanks to the experience with the animals.

“We will continue our support for Shin so one day he could become a professional animalier,” said Kwon Soo-whan, director at the Everland Zoo.

“All the people at the zoo helped my son become more confident and social, so I really thank them for the change they have brought in him,” said the mother.