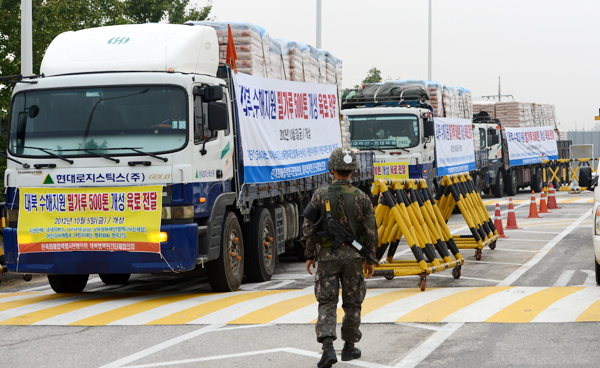 Trucks loaded with 500 tons of flour for flood victims in the North head yesterday through Tongil Bridge in Paju, Gyeonggi, sent by the Korea NGO Council for Cooperation with North Korea. [NEWSIS]


Amid signs that North Korea may carry out market-oriented agriculture reform, sources confirmed yesterday that the communist state has recently replaced its agriculture minister. 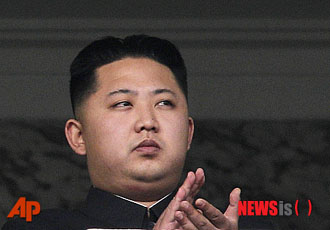 North Korea’s previous agriculture minister, Yi Kyong-sik, who was appointed in March 2011, has not been mentioned in the media since June 18 after attending a ceremony in Pyongyang.

Hwang is known to be an expert on agricultural affairs. He was in charge of farms in North Hamgyong Province.

The replacement is boosting recent speculation that the North is trying to institute agricultural reforms following the announcement of new economic measures on June 28. According to various reports, the North is considering reforms, including allowing farmers to keep and sell 30 percent of their harvest privately after selling 70 percent to the state.

Though expectations were high that North Korea would announce concrete economic reform measures during its unusual parliamentary meeting held last month, the KCNA did not report any.

Seoul didn’t assign much meaning to the new minister.

“It looks like the replacement was made as part of a generational shift,” said a government official. “It’s difficult to stretch the meaning of the move and judge that the North is carrying out agricultural reforms.”

According to a report released Thursday entitled “Crop Prospects and Food Situation” by the United Nations Food and Agriculture Organization (FAO), the North’s food conditions have worsened.

“The harvest of the 2012 early season crops was poor,” the report stated. “A recent dry spell and floods are expected to affect the main season food production.”

Including North Korea as one of the 35 countries that require external assistance for food, the FAO report added, “Economic constraints and lack of agricultural inputs continue to lead to inadequate food supplies.”

According to the report, from last November to August, North Korea secured 43,000 tons of grain in external aid and 388,000 tons from imports, which would only be 60 percent of total imports and aid needed by October. Most of the aid was given by Brazil, Sweden and Australia through the World Food Program, and imports were from China, Ukraine, Argentina and the European Union.

The Korea NGO Council for Cooperation with North Korea, an alliance of 55 nongovernmental aid groups in South Korea, delivered 500 tons of flour to North Korea yesterday through the land border to Kaesong. The aid will be given to flood victims in South Pyongan Province.

Last month, World Vision, a private charity group, donated 500 tons of flour in relief aid to the North. It was the first relief activity by South Korea since recent natural disasters hit North Korea. The South Korean government had also offered the North relief aid of materials including flour, instant noodles and medicine last month, but the North said it didn’t need it.