7brau takes on Hite and OB with dark ales

7brau takes on Hite and OB with dark ales 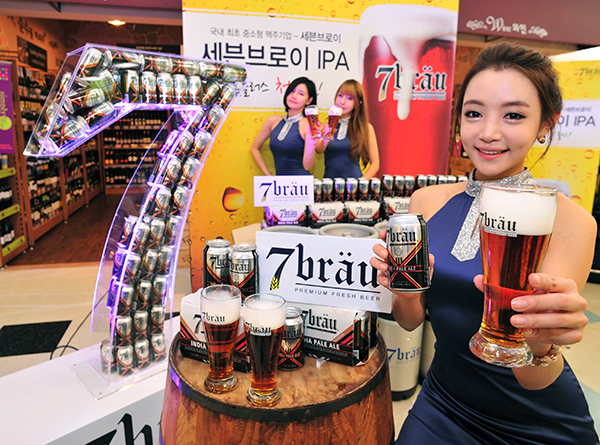 Models pose with 7brau India Pale Ale canned beers at Homeplus’s Yeongdeungpo branch in Mullae-dong Thursday. 7brau has introduced ales for the first time in the domestic beer market in cooperation with Homeplus. Provided by company


In a domestic beer market dominated by Hite Jinro and Oriental Brewery, the small- and medium-sized company 7brau has thrown down the gauntlet to emerge as the third domestic beer brand.

It wants to do so with ales.

It is also the first time that a beer company has introduced ales, with a dark hop flavor and bitter taste, in the domestic beer market, which is dominated by lagers.

The 7brau IPA is made of natural ground water from Gangwon area, mixed with German hops and malts, creating a soft head and unique fruity redolence. The well blended sweet and sour taste is the hallmark of the beer. It has a 5.5 percent alcohol content.

The beer on draft has been selling well since late last year in Gangnam and Hongdae areas, and has gotten a good reputation among beer lovers through a word of mouth, according to Homeplus.

Homeplus said it is releasing the 7brau IPA in its stores in 30 areas, and plans to gradually expand sales to all its stores nationwide by next year.

“Sales of the 7brau IPA canned beer will help the expansion and the diversification of the domestic beer culture,” said Kim Kang-sam, the company’s CEO. “Ales will soon become a sensation in the domestic beer market.”

The beer manufacturer has its headquarters and production facility in Hoengseong, Gangwon, and produces three kinds of premium beers including 7brau Pilsner and 7brau Stout.

“In order to realize shared growth, we have decided to support the small beer company 7brau to settle in the market and expand sales,” said Kim Hong-seok, head of liquor sales department at Homeplus.

“We plan to put utmost effort for the 7brau beers to grow as the representative luxury beer in the premium beer market controlled by foreign beer brands.”