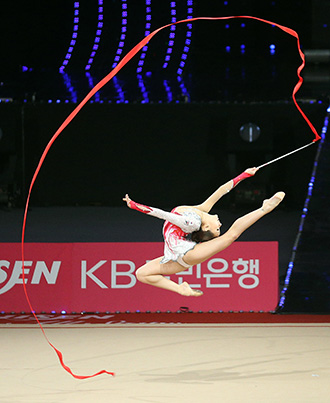 Korean gymnast Son Yeon-jae performs during the LG Whisen Rhythmic All Stars, a gala show held at the Kintex in Ilsan, Gyeonggi, yesterday. Son, 18, the most popular gymnast in Korea, finished fifth in the all-around finals at the 2012 London Olympics, the best-ever finish by a Korean at the Olympics. Several other world-class gymnasts also participated in the gala show including London Olympic silver medalist Daria Dmitrieva of Russia and London Olympic bronze medalist Liubov Charkashyna of Belarus. [YONHAP]