K.J. Choi wins his own invitational on KGT

K.J. Choi wins his own invitational on KGT 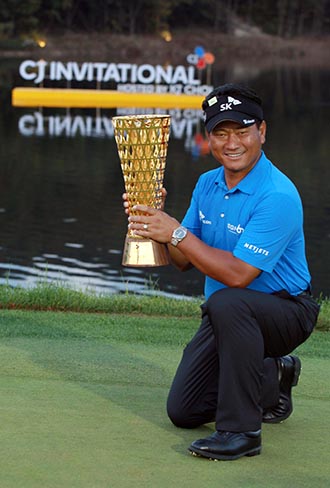 Choi Kyoung-ju, also known as K.J. Choi, an eight-time PGA Tour winner, yesterday won a Korean Golf Tour event that he also hosts for a second year in a row.

At the CJ Invitational held at Haesley Nine Bridges in Yeoju, Gyeonggi, Choi, 42, carded a four-under 67 in the final fourth round and finished with a 15-under 269, two strokes ahead of the runners-up Bae Sang-moon and Jang Dong-kyu.

It was the season finale for Choi, who settled at 94th in the PGA winnings ranking this season. With the CJ Invitational, Choi took home $118,875.

It is the 28th victory the Korean golfer has clinched after turning professional and his 16th in Korea.

The CJ Invitational, co-sanctioned by the KGT and the Asian Tour, was launched last year. This year, Choi invited several well-known players from the U.S. and Japan including Ben Curtis, the winner of the 2003 Open Championship.

Choi entered the fourth round as a co-leader with Kim Dae-hyun at 11-under 202. Choi recorded 3-under 68 in the third round that was also held yesterday due to the weather conditions on Saturday.