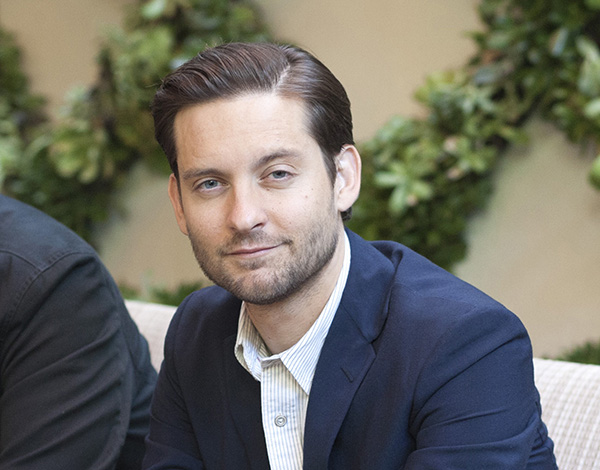 
LOS ANGELES - Tobey Maguire’s boyish looks have played no small part in landing him a succession of roles as the youthful hero in films such as “Spiderman” or the underdog jockey in “Seabiscuit.”

Now, the 37-year-old actor is finally growing up on screen in “The Details,” a dark comedy which marks a return to the lower budget, experimental fare favored by Maguire long before he first donned Peter Parker’s blue and red suit.

Maguire plays Dr. Jeff Lang, a married father who strays from his wife Nealy - played by Elizabeth Banks - by sleeping with a former medical school friend (Kerry Washington). “The Details” will be released on video-on-demand and iTunes Friday, ahead of a theatrical run in November.

“I did have a 10-year period where a lot of my time was taken up doing the ‘Spider-Man’ movies and I was heavily identifiable as that character,” Maguire told Reuters of the three films in the series, released in 2002, 2004 and 2007.

“Because Peter Parker is such a young and iconic figure, I think there is a heavy identification with me as a more youthful kind of guy,” he said.

Maguire, who made his name playing coming-of-age roles in 1990s movies like “The Cider House Rules,” “Pleasantville” and “The Ice Storm,” said the latest film is tonally very different from anything he has done before.

In “Details,” written and directed by Jacob Aaron Estes, Maguire’s Dr. Lang battles both raccoons wrecking his back lawn and a marriage that has turned stale.

His affair sets in motion a chain of events that escalates into absurdity, involving an extortion, organ donation and murder. Laura Linney, Ray Liotta and Dennis Haysbert also star.

“I do enjoy films where the screws come down on a character,” Maguire said of playing Dr. Lang. “I can understand how this guy got to a point where he made a bad decision and then in trying to retrieve that, it all unravels.”

The film casts him in the adult role of father and husband which he plays in real life as well, with his wife Jennifer Meyer and their two children.

“It’s great that I’m of an age where I feel like there are more interesting roles and opportunities,” he said.

While the filming schedule and promotional duties of “Spider-Man” had limited Maguire’s opportunity to work on other films, the actor is less constrained now.

This summer, he shot the Jason Reitman-directed film, “Labor Day,” an adaptation of a Joyce Maynard book about a mother and son who pick up a convicted murderer who has escaped prison.