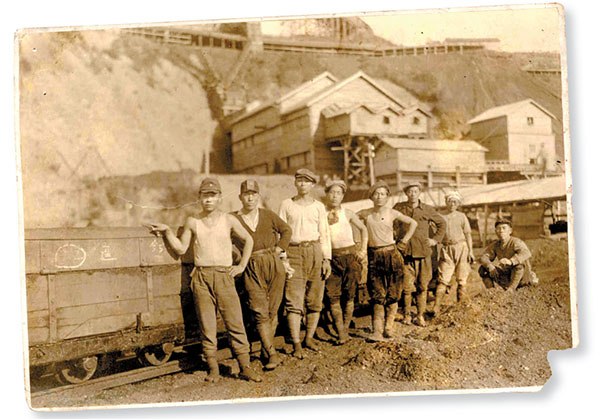 Yun Yun-deok (fifth from left) was forced to work in a coal mine in Sakhalin during the Japanese colonization. The picture was given by a descendent to a commission in charge of finding and supporting victims. Provided by the commission


Korea has many government-run commissions, but few have longer names than the Commission on Verification and Support for the Victims of Forced Mobilization under Japanese Colonialism in Korea. And fewer still have a shorter time left to operate.

The commission deals with an issue that’s politically and diplomatically sensitive, yet critically important for Korea and Northeast Asia: confirming the identities of Koreans forcibly mobilized during Japanese colonial rule (1910-45), including the sex slaves euphemistically known as “comfort women”; compiling related documents, newspaper articles and personal belongings; and extending financial support for victims and their families.

While the commission has been doing all that since it was established in 2004, it is required by law to end its mission by the end of the year.

But commission members say their work is far from done and the commission should be a permanent entity, like Israel’s Yad Vashem, the World Center for Holocaust Research, Documentation, Education and Commemoration, or the German “Remembrance, Responsibility and Future” Foundation that compensates survivors of slave and forced labor prior to and during World War II.

Chairman Park In-hwan and other members say shutting down the commission will only facilitate Japan’s attempts to avoid taking responsibility for brutal acts in its imperial past. That view is shared by Korean victims and civic activists, as well as some Japanese lawmakers and civic groups.

Supporters of limiting the lifespan of the commission believe its existence shows that Korea is “trapped in the past” and it would hinder the ability of Korea and Japan - key trading partners - to move toward a more productive and amicable future.

But on a visit to commission headquarters on Saemunan-ro, Jongno District, central Seoul, a large framed writing hung on the wall: “The nation that forgets its history repeats that history.” 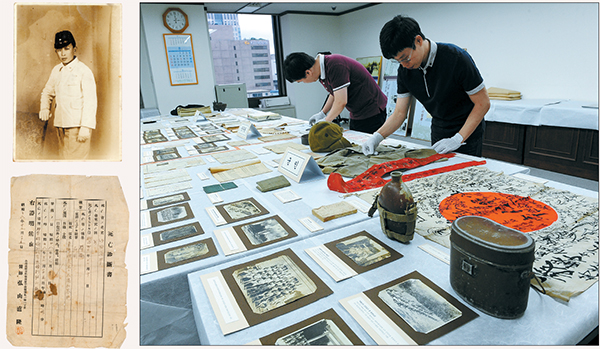 A photo shows Jeon Woo-sik when he was working as a colonial laborer (top left); the death certificate of Jeon’s father, who was also a colonial laborer (above left); and some of the 400,000 items collected by the commission as part of its mission to document forced labor by the Japanese. [JoongAng Ilbo, Yonhap]


Deprived of his father, youth

On a cold winter day in 1942, the Japanese took a man to an airfield in Asajino on Hokkaido in Japan and forced him to work as a laborer. The following year, his son was taken to a coal mine in Kyushu and then to a locomotive factory in Osaka.

The 36-year-old father and 17-year-old son were living their worst nightmare - forced into intense labor in unspeakable conditions, each not knowing if the other was alive.

They were both called Takeda, but the father’s real name was Jeon Hae-pyeong and the son’s Woo-sik.

In the winter of 1943, Woo-sik learned his father had died. Not until the following year was he allowed to go to Asajino to look for the body of his father. When Woo-sik found the corpse in the snow, he doused it with gasoline and cremated it.

With Japan’s defeat in World War II and the subsequent independence of Korea, Woo-sik returned to Korea. “The forced mobilization took away my father and my youth,” says the 86-year-old Woo-sik.

The pictures of Woo-sik in Osaka and the death certificate of his father were among the 400,000 materials the Commission on Verification and Support for the Victims of Forced Mobilization under Japanese Colonialism in Korea has collected.

The materials are kept in a 198-square-meter (2,131-square-foot) storage room and had not been revealed to people outside the commission until August.

The materials include 226,000 reports on victims of forced mobilization; 3,000 supporting documents, such as paychecks to laborers in Japan; written, video and audio statements of victims; and journals, essays and letters.

Among the most notable materials are 379 books used by the Japanese government to record information about Koreans conscripted for labor. The lists include names, locations of family registers, dates of birth, types of work they did and the length of conscription. For instance, a 1945 register of Koreans forced to work at a mining station in Sumitomo Akabira lists 1,024 names.

A museum to house materials collected by the commission is scheduled to be completed late next year in Busan, the port city through which many of the laborers passed.

“Whenever Koreans talk about forced mobilization, Japan says, ‘Give us the evidence,’?” said Park, the commission chairman. “When it comes to history, Koreans tend to get emotional, resorting to protests and signature-gathering campaigns. But gathering facts is more important. And that’s what we’ve been doing.”

Sixty-seven years after it ended, Japanese colonialism remains an issue in large part because Japan refuses to talk about it. Japan claims all issues regarding colonial rule in Korea were settled in a 1965 package compensation agreement reached when the two countries established diplomatic relations.

Another factor, according to the commission, was the absence of an “official” Korean government in 1945. Instead, the United States was overseeing the southern part of the peninsula and the Soviet Union the north.

“In the cases of other countries, when they recover from colonial rule or war, a government takes the helm, collecting evidence and proof, and fighting for apologies and compensations,” Park said. “The United States was not in a position to do that. Then the Korean War happened.”

That’s why most of the commission’s work has been like collecting pieces of a puzzle to get a big picture of what really happened.

So far, the commission has been contacted by hundreds of thousands of alleged victims. After studying the materials submitted, it has declared 226,000 victims of Japan’s forced mobilization.

The big picture that the commission and historians have drawn indicates that three million to five million Koreans were forced into labor in Japan and elsewhere during the colonial period.

As for the disparity in numbers, commission officials say there are several possibilities.

Some victims never made it back to Korea. In fact, there were media reports recently concerning Koreans conscripted by Japan still living in Sakhalin. Also, a substantial number of victims likely died before the commission began its work, and their descendents might not have contacted the commission.

Even if all the pieces of puzzles are collected, they would represent only half of the picture. “We have no idea on North Koreans that were also conscripted to work in Japan during the colonial period,” noted Lee Jae-chul, the commission’s spokesman. 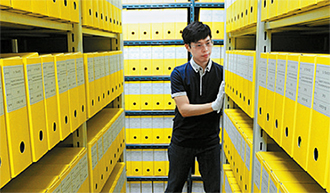 Commission officials emphasize that of 100,000 victims who have filed for financial support, it has been able to compensate only 56,000. In a storage room at its headquarters, piles of work remain.[NEWSIS]

Fate in the air

On Sept. 19, officials with the commission and the Ministry of Public Administration and Security visited the Blue House to request an extension for the commission. According to related laws, the commission, with National Assembly approval, can receive two six-month extensions.

But according to the commission, Blue House officials demanded that they shut down the commission by the end of the year. Once the commission closes, all of its work will be transferred to the Ministry of Public Administration and Security. “We thought there wouldn’t be much of a problem extending our operation, so we were pretty surprised and disappointed,” said a commission official.

As the controversy intensified in some media, mostly left-wing newspapers, officials at the Blue House said keeping the commission open is an option.

“It is too early for the Blue House to talk about the shutdown of the commission,” Park In-ju, senior secretary to the president for social integration, told the Hangyeorye newspaper. “We will follow whichever proposal the public administration ministry draws up.”

Officials at the commission emphasize that of the 100,000 victims who filed for financial support, it has been able to compensate only 56,000.

Once victims file for financial support, the commission reviews their situations and attempts to assess the severity of the damage they suffered. The largest payment - 20 million won ($18,000) - goes to the families of those who perished.

Last Tuesday, Yonhap News Agency reported that the government earmarked 1 billion won to set up a nonprofit public foundation early next year to carry out the memorial projects that allow families to commemorate the loss of their loved ones.

“The foundation will not be run by the government, but there are certain things that the government-run commission should do, like using taxpayers’ money to pay the victims,” Lee said.

And it’s not just victims who oppose closing the commission; some Japanese lawmakers and civic groups are fighting it.

Azuma Konno, a lawmaker of the Democratic Party of Japan, and two other Japanese lawmakers visited the commission on Sept. 23, emphasizing the importance of the commission’s work. “We hope the Korean government will allow the extension of the operation of the commission,” Konno told reporters.

Also, 37 Japanese civic groups, including The Network for Truth Finding of Forcible Mobilization, recently submitted a letter to the Korean prime minister and National Assembly chairman, among others, through the Korean Embassy in Japan, urging continuation of the commission’s work.

“There are many projects that have yet to be finished, like the excavation of remains of the victims conscripted overseas,” said Sin Yun-sun, president of the group of descendents of victims taken to Sakhalin. “The Japanese government would be most happy to see the shutdown of the commission.”