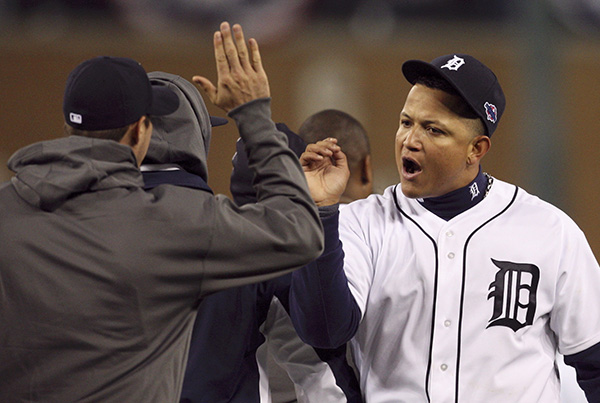 
DETROIT - The Detroit Tigers beat the Oakland Athletics 3-1 while the Cincinnati Reds won 5-2 at the San Francisco Giants on Saturday, claiming victories in the opening games of their divisional series in the Major League Baseball playoffs.

Detroit starter Justin Verlander shut down Oakland after a lead off homer. He matched his career postseason high with 11 strikeouts.

That made up for Coco Crisp’s home run that had silenced the Comerica Park crowd just one batter into the game.

Alex Avila homered in the fifth inning for Detroit, which took the early advantage in the best-of-five series.

The Tigers are the first home side to win in the playoffs, with both Atlanta and Texas beaten in the sudden-death wild-card games while the Giants were beaten by the Reds.

Cincinnati overcame the loss of starter Johnny Cueto to a back injury in the first inning.

Brandon Phillips hit a two-run homer in the third and Jay Bruce added a solo drive leading off the fourth as San Francisco starter Matt Cain allowed his first career postseason earned runs, having gone untouched during the Giants’ World Series season of 2010.

Detroit ace Verlander, as usual, seemed stronger in the later innings, striking out the side in the sixth and the first two hitters of the seventh.

Game 2 is Sunday, with Doug Fister taking the mound for Detroit and left-hander Tommy Milone for Oakland. Then the series shifts to the West Coast.

“It’s always important to get Game 1. The way it is now, obviously, it’s nice starting here but to play the last three games in Oakland is definitely tough,” Avila said. “Every game’s important, but it felt real good to get one out of the way.”

The American League Central-champion Tigers, in consecutive postseasons for the first time since 1934-35, responded to Crisp’s shock run by tying the game in the bottom of the first inning. Austin Jackson hit a lead-off double and moved to third on Quintin Berry’s single.

Triple Crown winner Miguel Cabrera, who went 0 for 3 with a walk, grounded into a double play, but Jackson came home to make it 1-1.